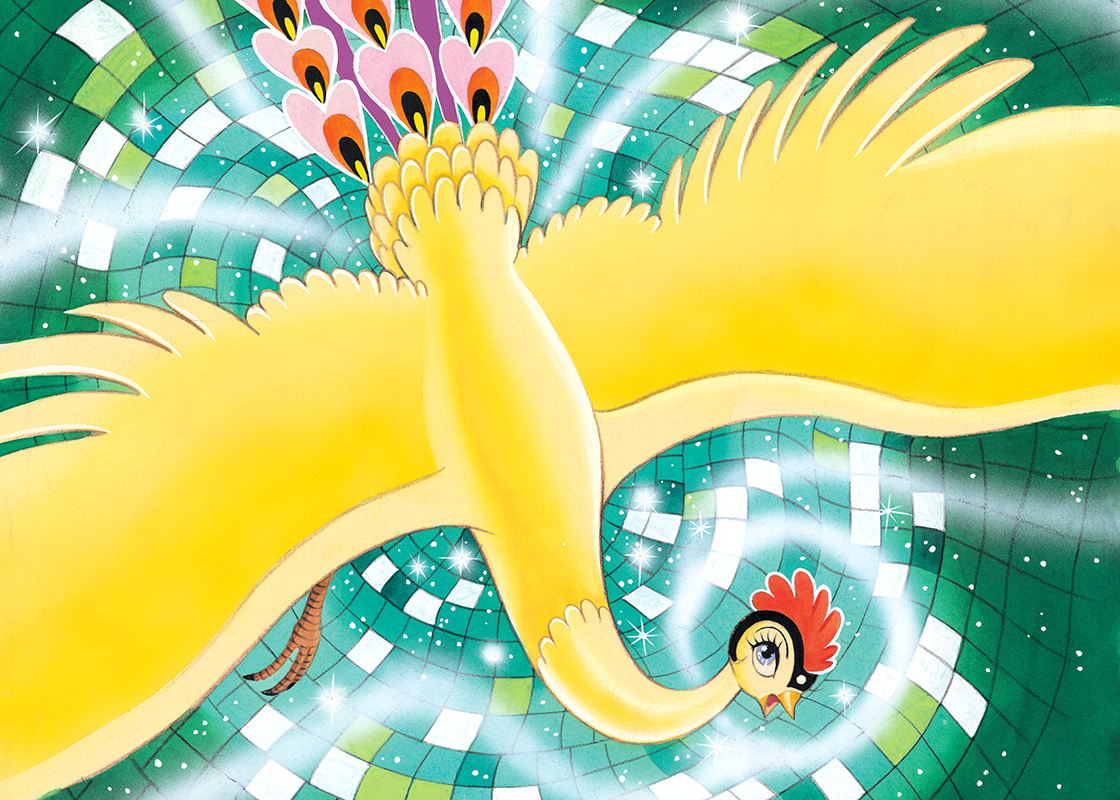 Phoenix was Tezuka's life work as well as one of his representative works. He explored philosophical themes of "life and death" and "reincarnation" in depth by depicting stories developed around Phoenix, the immortal life-form beyond time and space. Phoenix navigates the readers by traveling back and forth, between past and future, through the series. Tezuka reflected his own historical view and prevision for future, also tackled a vast-scale question of what universe is.


Upon the initial publication of Phoenix in the form of a comic book, Tezuka wrote in the prologue, "Phoenix is a drama about life and death. Phoenix lives endlessly, from past to present to future. On the other hand, human beings have struggled desperately to obtain eternal life, which is something like a fate for us".

Looking back the history of Phoenix, the root is found in Phoenix, Dawn, serialized on Manga Shonen (Gakudosha) from July 1954 till May 1955.

Actually, Tezuka was inspired by a phoenix appearing in the animation film, Konyok-Gorbunok produced in Soviet Union in1947 upon the creation of his version of Phoenix. It's said a phoenix's feather brings harm in the Russian folk tale while Tezuka's phoenix is a symbol of eternal life. Any injured or seriously ill people can be healed just by a single stroke with the feather of the bird.

All the characters appearing in Phoenix are desperate to catch the eternal bird. They chase it to drink its blood which is believed to bring eternal life to them.
There has been a lot going on over the work since the initial publication of Manga Shonen edition. The Manga Shonen edition was suspended in the course of the story, but the work itself was serialized again on Shojo Club, a magazine for girls. After then, the work came to be serialized again on COM (Mushi Pro shoji), the magazine Tezuka began by himself, which is the edition we now know as Phoenix. But COM, whose title was changed to COM Comics during the serialization of Nostalgia, was suspended again. Then it's revived, suspended and altered repeatedly. Finally, COM was ceased due to the bankruptcy of Mushi Pro shoji on August 22, 1963. Later, Phoenix came to be serialized on Gekkan Manga Shonen (Asahi Snorama), followed by the serialization on Yasei Jidai (KADOKAWA). According to a feature article titled "Heroes of Tezuka Manga" on Akahata issued in January 1974, Tezuka had an idea to incorporate a story of Astro Boy into Phoenix as one episode about the 21st century. The readers would find the trail of such his idea in the initial edition of Sun in which Prof. Ochanomizu made a cameo.

Thus, he even planned to have the essence of his representative work. Literally Phoenix was his life-work he was enormously committed to. Unfortunately, Tezuka left this world before completing the great project, the story gradually approaching to the present by traveling between past and future. By the way, the hint of the chapter after Sun, though which was never realized due to his death, was partially revealed on Tezuka Fan Magazine vol.78 issued on Dec. 30, 1988. According to the article, the new chapter set in time of Sino-Japan war was planned to be named Land featuring a military man as the main character. The story was supposed to be a large-scaled war melodrama starting from Shanghai and ending in Loulan.

"What is death? What is life? People have been trying to find the answer for the simple but critical questions which have not been solved yet."

Tezuka wrote above in the prologue of the series as if he predicted the fate of the work never completed forever. 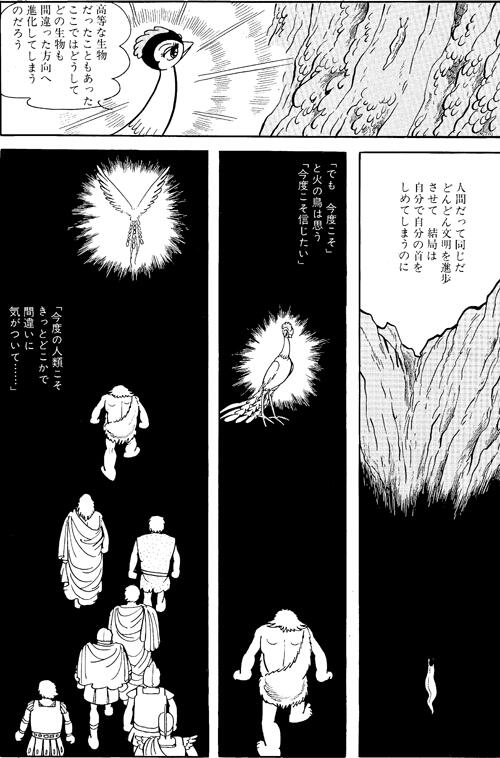 After the first chapter "Dawn", I wrote the last chapter "Future". I just tried the style as a new attempt. What comes next is again an ancient story after Dawn. Thus, the series goes back-and-forth till the past and the future finally meet in the modern world, and finally ends with the story in modern time, where all the stories so far are connected, consisting a long drama.

Each chapter seems totally independent first. But it becomes clear at the end that all the episodes, from the beginning to the last, are just parts of the long story. There is no break or gap in human history. That's the same for the series. Through the series, Phoenix appears as a narrator to chain each time and story together.

I focused on "life" in each episode, trying to feature it from various aspects. I also tried a variety of styles ranging from Sci-Fi to mystery to comedy to war story, not to make the long series dull. (omitted)