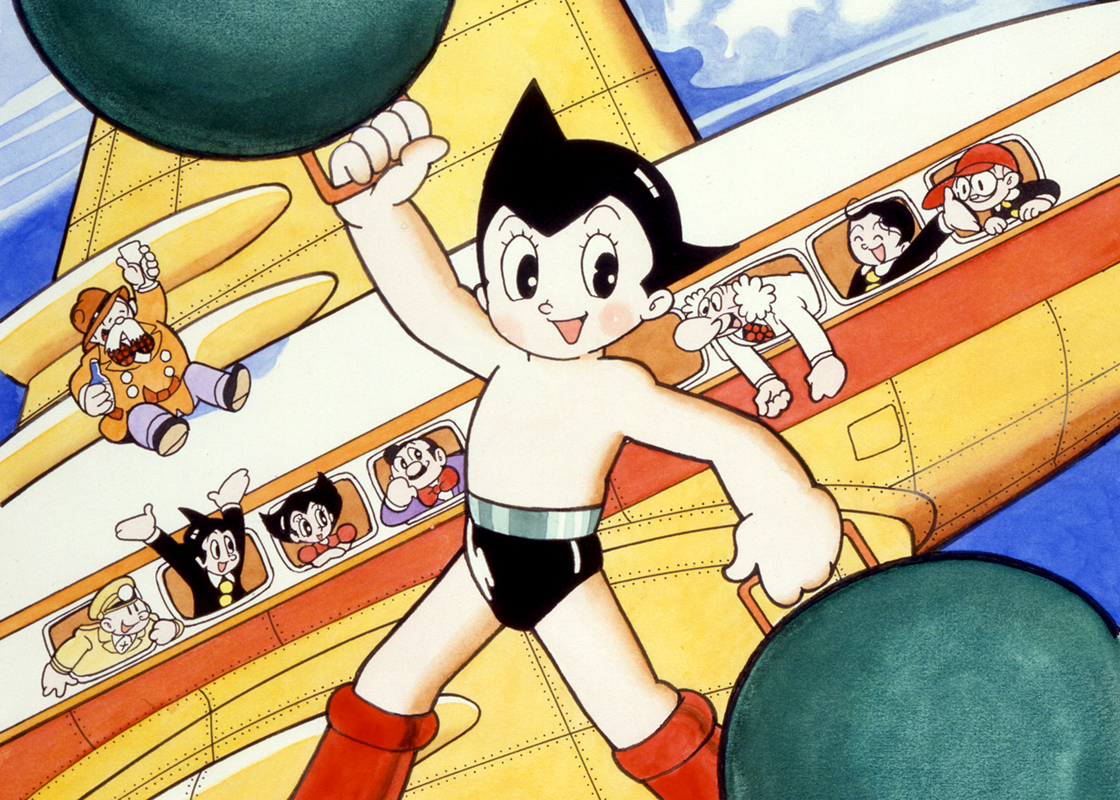 This is a Sci-Fi manga set in the 21st century, featuring Astro Boy, a robot hero with 100,000 horse power. 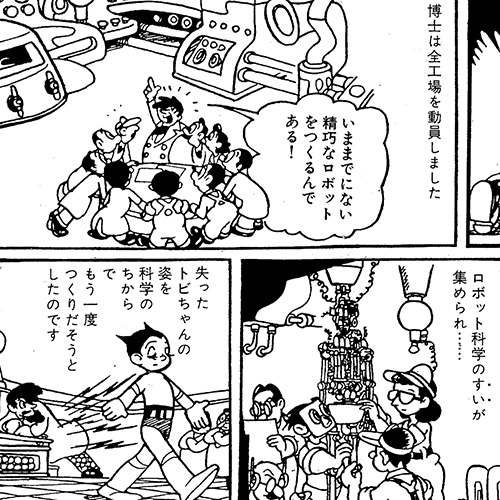 On April 7, 2003, Dr. Tenma, Director of Science Ministry, makes up a robot which looks exactly like Tobio, his late son Tobio involved in a traffic accident, by utilizing all the knowledge and power of the ministry. He loves the robot just like his real son, but gradually gets irritated at the robot as it does not grow up like a human. Finally, he sells out the robot to a circus. At the circus, the robot, newly named Astro, is forced to work. Soon later, so-called "robot right" is approved thanks to the effort of Dr. Ochanomizu, new Director of Science Ministry. The right brings freedom to Astro, too. Astro comes to live with his robot parents made by Dr. Ochanomizu in the suburbs and go to Ochanomizu elementary school. Yet Astro is a super hero with 100,000 horse power. He confronts evils bravely whenever he is needed. 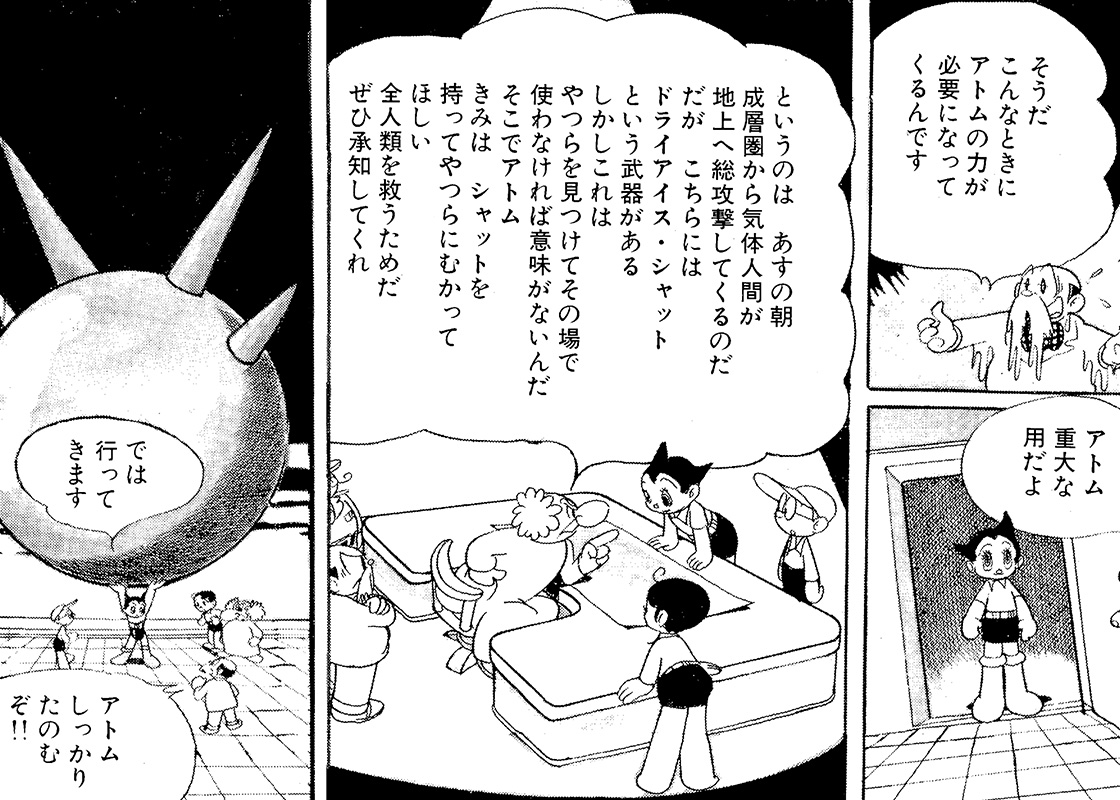 The character Astro Boy and the manga work Astro Boy are both loved by a lot of celebrities, artists and cultural figures, considered as the symbol of Tezuka's clear-sightedness and conscience and often used in a figurative sense, such as "scientists specializing in robot engineering hoping to make robots like Astro Boy" or "a town looks like a futuristic city appearing in Astro Boy". Dr. Ochanomizu is also used in a figurative sense, too, such as "If asked to name one scientist, I would name Dr. Ochanomizu." Furthermore, Astro Boy is often picked up as a theme for art, a symbol of science technology or a motif of manga. Thus, Astro Boy has been widely disseminated among people. 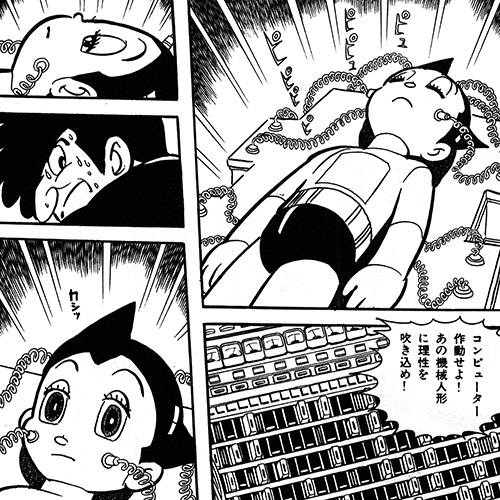 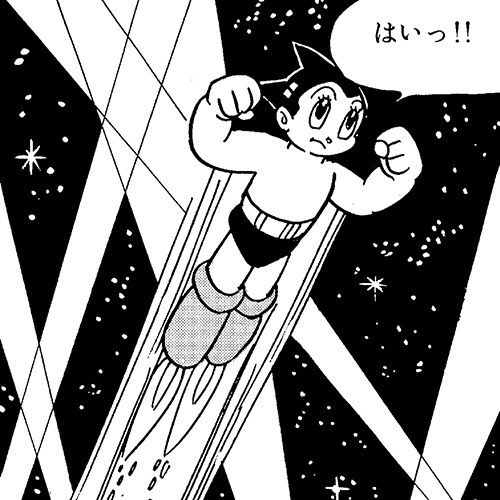 Originally, Astro Boy was a robot boy appearing in Ambassador Atom as one of the side characters, and the manga Astro Boy was a new manga series following Ambassador Atom, featuring the robot as the main character. The work gained popularity among people, becoming one of the most famous works by Tezuka Osamu. In 1963, the work was turned into TV animation series, which was the first commercial animation produced by Mushi Production established by Tezuka as well as the first Japanese TV animation series. The series consisting of 30 minutes episodes was broadcast every week, initiating the first TV animation boom in Japan. 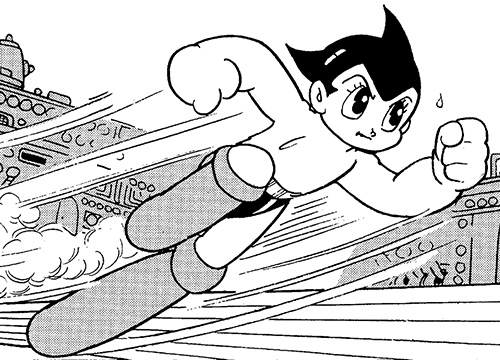 He is a robot boy with 100,000 horsepower and seven special abilities. Although he was originally made, modeled on Dr. Tenma's late son, Tobio, he is sold to a circus and re-named Astro Boy by the circus manager. With his super abilities, he solves several problems to save the Earth.
>Character/Astro Boy 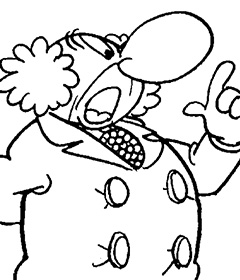 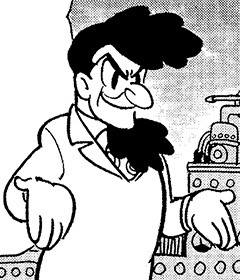 He is Director of Science Ministry sympathetic to robots, believing they also have the rights as humans do. One day, Dr. Ochanomizu finds Astro working at the circus and decides to become his guardian, taking him along to his home. He also makes Uran and Astro's parents for him.
>Character/Dr. Ochanomizu

He is a genius robot engineer and the creator of Astro Boy. He sometimes goes to the extreme, and sells Astro out to the circus, get irritated that he does not grow up as humans do.
>Character/Dr. Tenma 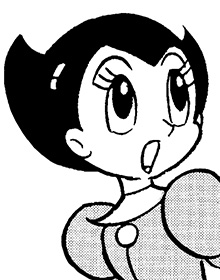 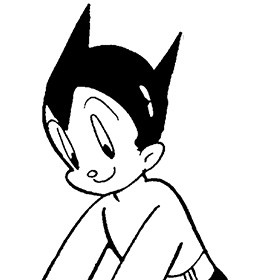 She is a robot girl made as Astro's younger sister. She is tomboy but cares about her brother very much.
>Character/Uran

He is a robot boy made as Astro's younger brother. He is kind a little easygoing and not good at detailed work. He is equipped with a function to resonate with Astro. 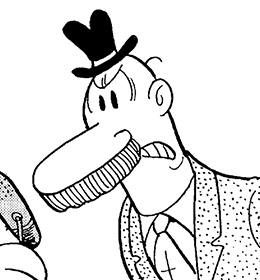 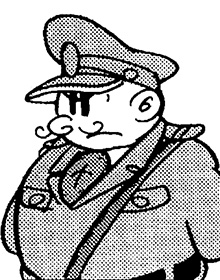 He is a detective standing in opposition to robots. He doubts a robot as a criminal whenever incidents occur. Astro has also been suspected several times. But he is basically a dedicated detective.

He is a detective sympathetic to robots under Inspector Tawashi's command. 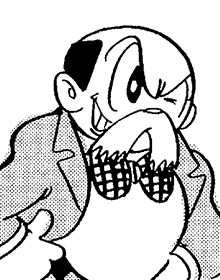 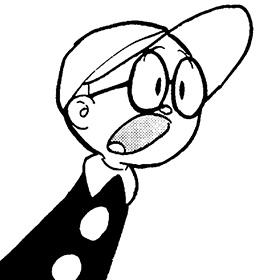 He is a teacher at Astro's school, also a private detective.
>Character/Higeoyaji

He is Astro's classmate, wearing big eye glasses and a hat. He cares about his friends and gets panic easily. 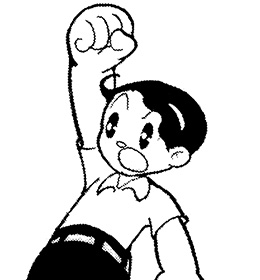 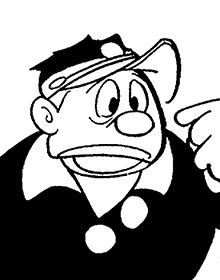 He is Astro's classmate. He is clever and has a strong sense of justice, also good at organizing the class.
>Character/Kenichi

He is Astro's classmate. He is rough and sometimes mean, but somehow maintains a good relationship with Astro. 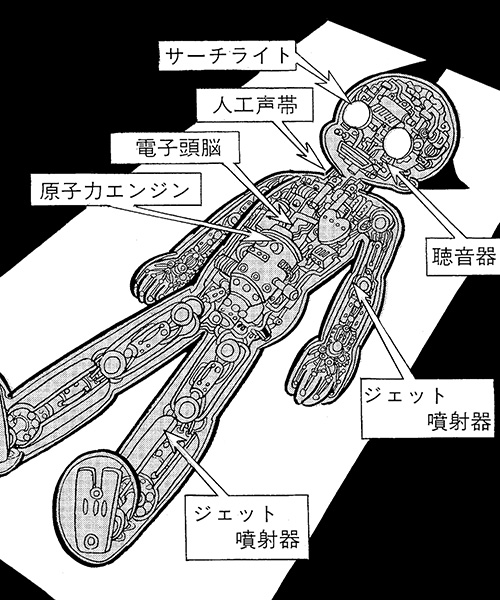 Excerpt from "Atom to Watashi" (I and Astro Boy) in Astro Boy, The Science of Robots published by Kobunsha

It's been almost fifteen years since I began writing Astro Boy. Now Astro Boy is cited as my representative work, but I never thought it lasted such a long time when I started it.
At the beginning of the serialization, no artificial satellite existed, no one knew who Gagarin was, and even TV was nothing more than a dream. And manga was annoyed by people, considered as illusional things to read which brought bad influence to the society.
But all those illusions have come to life now. Accordingly, I was put in a situation that I had to redraw some of the manuscripts.
Today, my young readers have already known a rocket to the moon and a computerized brain as common knowledge, saying "A vacuum tube in Astro's computerized brain? It's out of fashion. Even in a calculator, transistors or diodes are used". In their imagination, quite advanced robots equipped with computerized brains and atomic engines just like Astro Boy have already been flying, helping humans in daily life. (omitted) 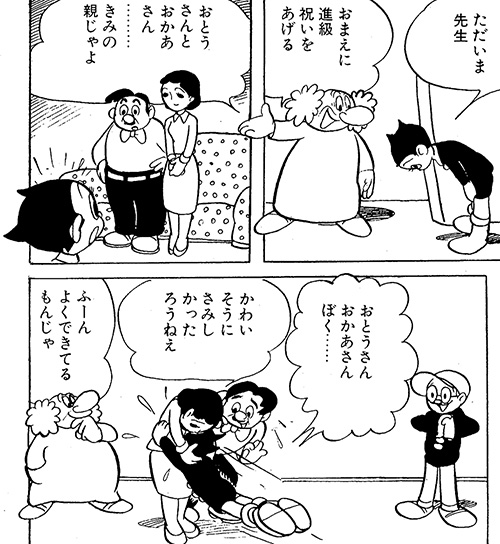 Astro giving a resent to his parents

(omitted)
Just before the completion of Ambassador Atom, the chief editor said to me, "How about writing a new series featuring Astro (Atom) as the main character? You know, he was the most -loved character." I replied, "Hmm. But he is a robot." "Yes, he is a robot. What's in mind is a robot in flesh and blood with human emotions, a close existence that readers can have a sense of closeness to him. I don't want a robot whose head and arms can be easily detached. We make a robot that cries, laughs and gets angry for justice ". "I see."
Come to think of it, Fuku-chan in the manga work titled the same by Yokoyama Ryuichi was also a side character appearing in the manga series titled Edokko Kencyan. But he was cast as the main character, gaining popularity among people. We decided to follow the example.
In April, 1952, Atom was revived as Astro Boy. Tetsujin Atom (Iron man, Atom) was the initial title announced in the previous notice, but it was changed to Tetsuwan Atom (means Lron arms,Atom, Japanese title of Astro Boy) as Tetsujin gave a heavy impression. Astro's parents were made after the appearance of Astro in the first episode, which the readers thought quite funny. (omitted) 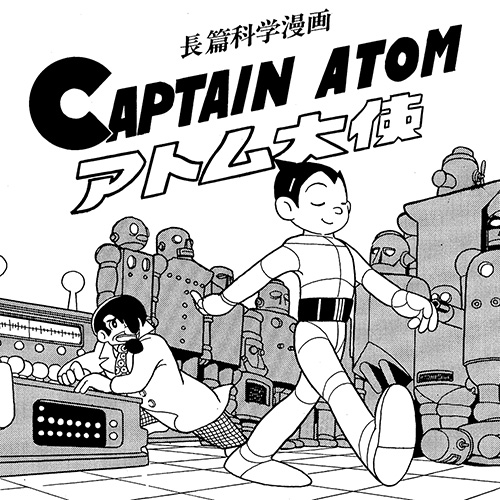 Astro giving a resent to his parents 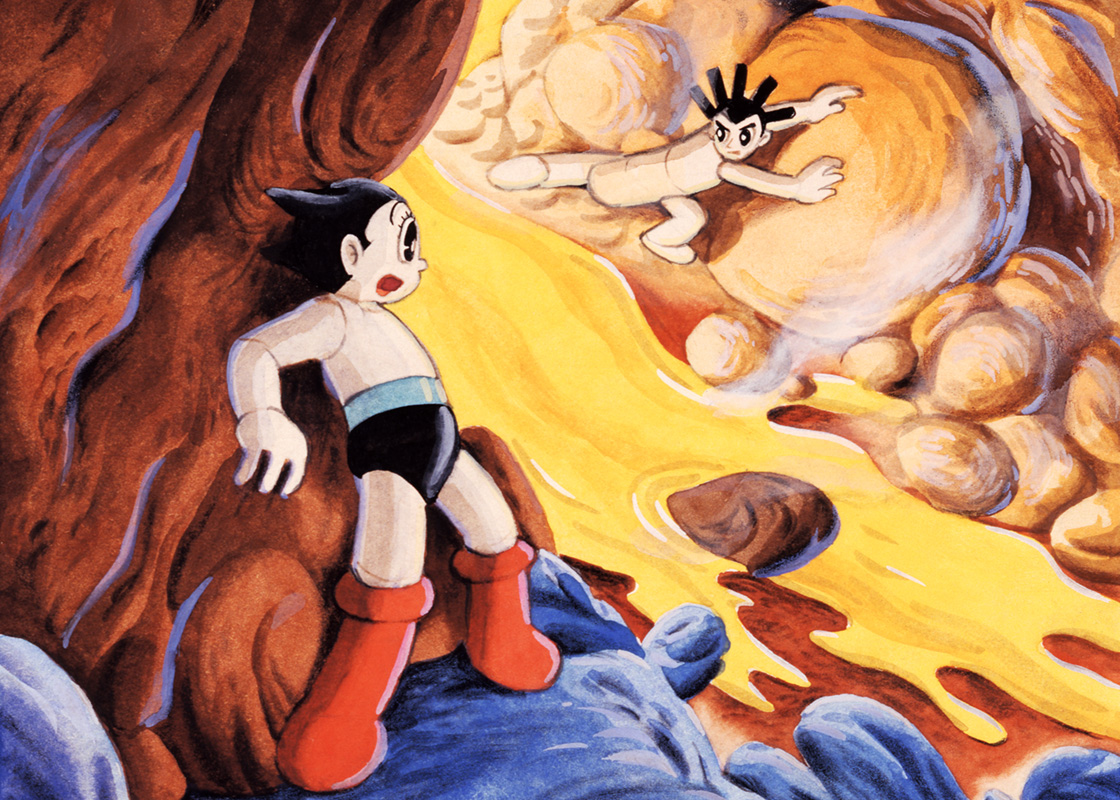