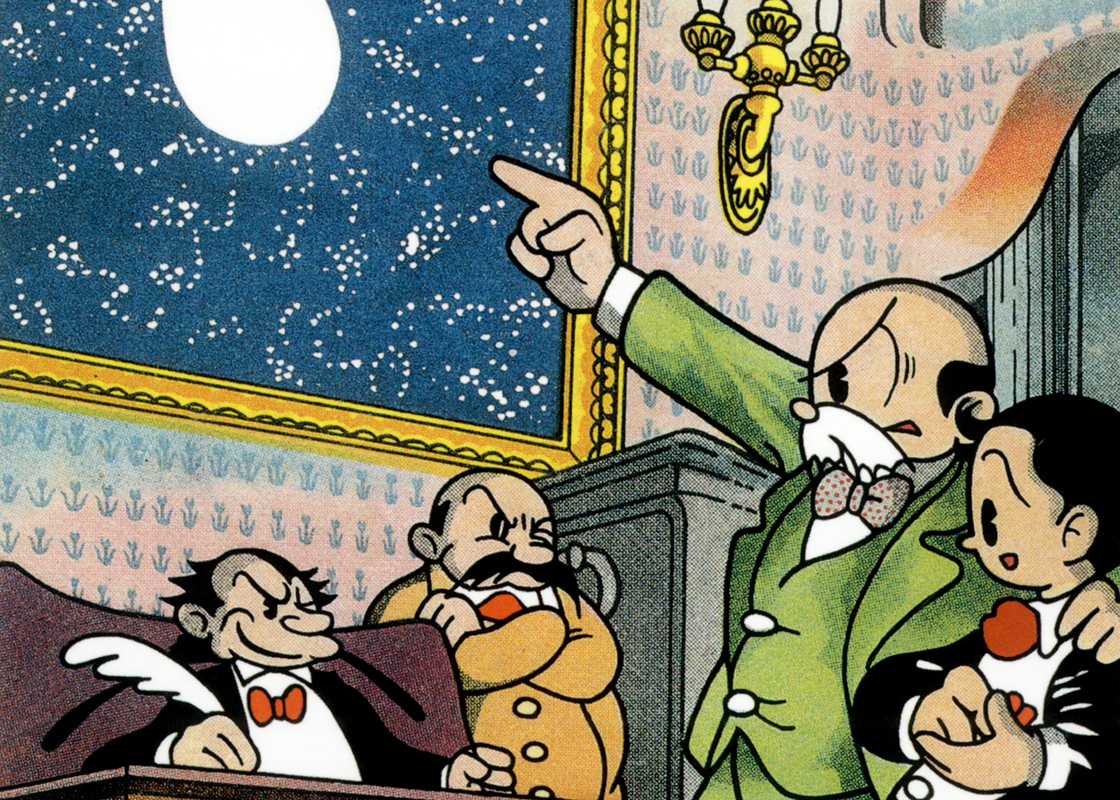 This is an adventure story of a boy by the name of Kenichi. He sets off for Planet Mamango, a planet just like the Earth in a remote age. 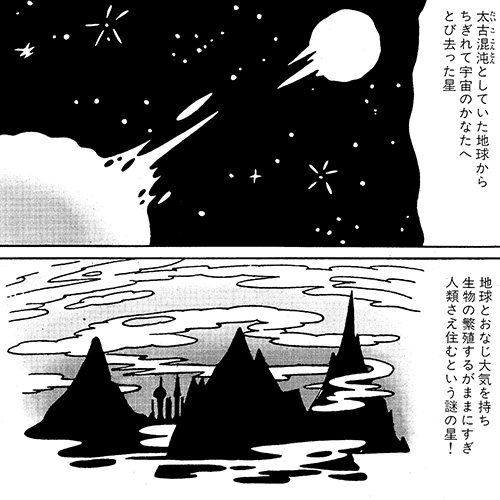 Planet Mamango, which was torn off from the Earth and flew far away universe in the remote past, is approaching close to the Earth for the first time in 5 million years. One night, a private detective by the name of Higeoyaji witnesses a murder and meets Shikishima Kenichi, a boy who has a doctoral degree and holds the key to the incident. Dr. Shikishima finds a piece of stone falling from Planet Mamango which generates tremendous energy. He, then, names it "energy stone", makes a rocket by exploiting it and sets off for the planet with the expeditionary team consisting of Dr. Butamo Makeru specialized in science, botanical humans by the name of Ayame and Momiji, a rabbit called Mi-chan and Higeoyaji. On the way to Planet Mamango, the team finds a newspaper reporter by the name of Acetylene Lamp hiding in the space ship, and reluctantly lets him accompany the team. Finally, the space ship arrived on Planet Mamango. What they see on the planet is the lost world - the ancient Earth where dinosaurs are walking around on the field covered with ferns and cycads. 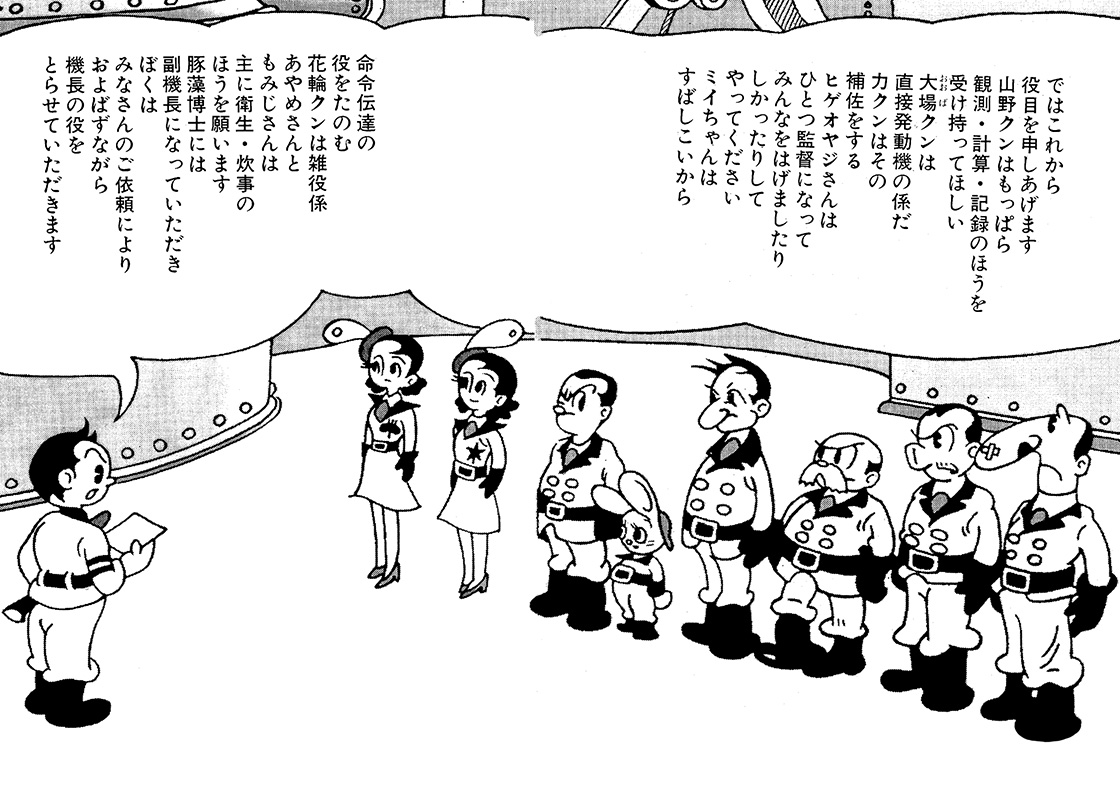 In this work, various fantastic characters, such as a rabbit which speaks like a human, a boy with a doctoral degree, villains who belong to a secret sect and beautify botanical women, appear. The story has a taste of seriousness often seen in his latter Sci-Fi works, and the mismatch of such seriousness and those cute characters creates a kind of ominous atmosphere. Remodeling animals close to humans is treated as an act against ethics and subject to punishment in Tezuka's other works including Black Jack. Dr. Shikishima and his lab members also suffer a tragedy at the climax of the story as well. 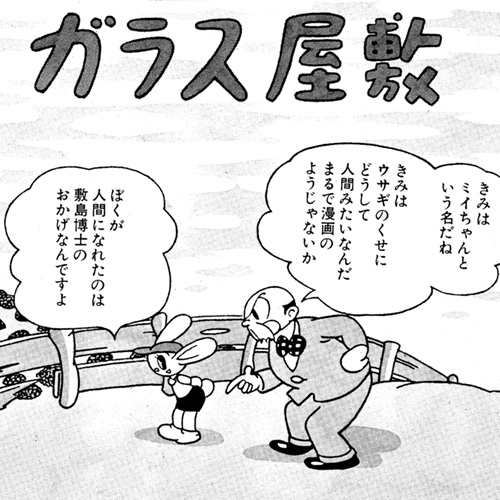 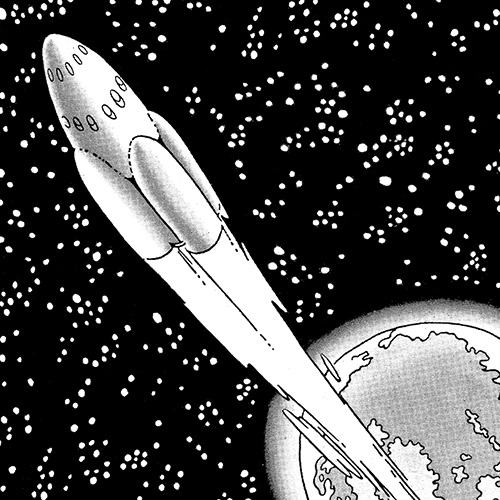 Lost World, consisting of two chapters, Earth and Space, was released on Dec. 20, 1948. Tezuka commented at the beginning of the draft of the work he authored during his junior high school days as follows: "This is neither manga or a novel", as there were any other long manga works based on a novel-like story structure with a sad ending then. Actually, he rewrote this work a few times. The first remake was done when he was around twenty years old and printed privately (though, this edition was lost later). The second remake was serialized on Kansai Yoron newspaper in 1946 (incomplete), followed by this edition (the third remake) in 1948. Then, the fourth remake was serialized on the magazine, Bokeno published by Akita Publishing in 1955 (incomplete). 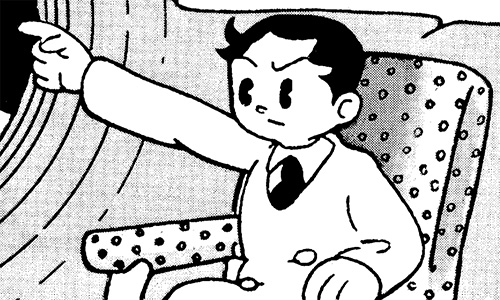 He is a young scientist studying a method to remake animal brains into human brains so that animals become as intelligent as humans. He is also on the hit list of Planet Mamango secret sect since he has found a precious meteorite falling from Planet Mamango.
>Character/Kenichi 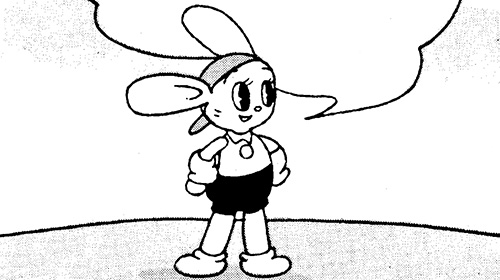 He is a rabbit with human intelligence made by Dr. Shikishima. He is a quite reliable existence both with cleverness of a human boy and athletic abilities of a rabbit. 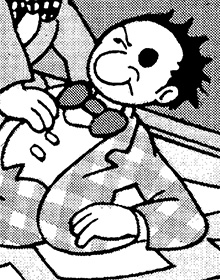 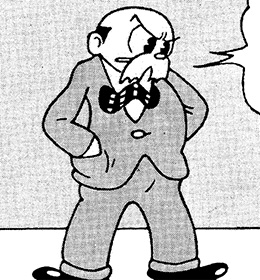 He is a famous private detective. He is involved in a conspiracy over Planet Mamango as he witnesses a murder of Mr. Jagata. He is a masculine guy who shows his high physical ability in action scenes.
>Character/Higeoyaji 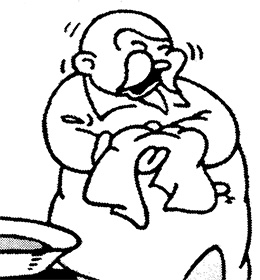 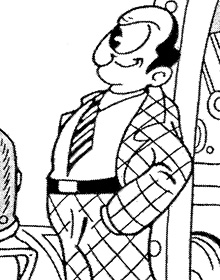 He is a science doctor who belongs to Dr. Shikishima's lab. He makes two female botanical mutants by the name of Ayame and Momiji on the course of his study to give plants intelligence by turning them into humans. He often laughs loudly.
>Character/Butamo Makeru

He is a reporter for Tenpura Newspaper. Hearing that the man who firstly makes the greatest discovery about Planet Mamango can get 10,000,000 yen as a prize, he tries to get the exclusive information frantically. But such his enthusiasm is not recognized by his boss.
>Character/Acetylene Lamp 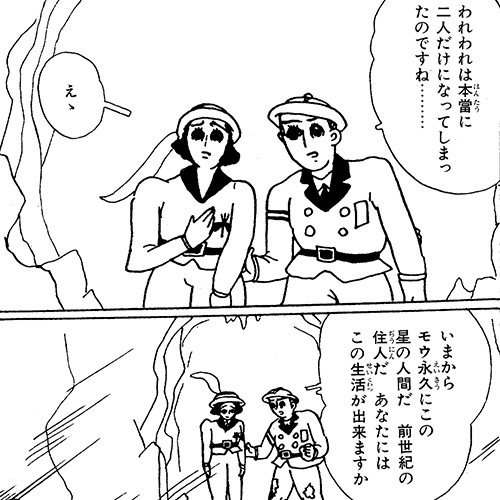 (omitted)
In terms of Lost World, I remade it again when I was around twenty years old and printed it privately (I personally thought it was a really good work, but the copy, which I thought one of my classmates had at hand was lost after the war). Then I started the serialization of the work on the newspaper in Osaka from November, 1946, which was suspended without being completed. Next, I wrote this edition for children, which was published by Fuji Shobo in the form of a comic book. For the private edition as well as the serialization on the newspaper, which were targeted for young men, Dr. Shikishima, the main character, was set as a young male. But for this comic book edition (it was considered comic books were only for children then), I had to set the main character up as a younger boy. The circumstance surrounding manga was far different from now, and I cast Kenichi, who made a debut in New Treasure Island and was often the hero of my works, as Dr. Shikishima.
Again, Lost World was originally targeted for young men, so some discrepancies occurred when I turned the original into the work for children. For instance, the scene that Dr. Shikishima and a botanical mutant, Ayame, get together was a taboo for children. So, their lines in the scene they are left alone on Planet Mamango were changed to "We are now a brother and a sister" "Oh, my dear brother". Accordingly, the original lines after then, "The botanical humans, the descendent of them..." was inconsistent with the said line.
I wrote Lost World just after completing The Mysterious Underground Men and Magic Mansion. It was supposed to be published very soon. But the publisher refrained from doing so for a while since they thought the cover was too unique or too plain and the story was too difficult. While waiting for the publication, I wrote The Four Fencers of the Forest and The Moony Man, which were eventually published earlier. But Lost World became a big hit. It sold close to 400,000 copies as soon as published. The work was also introduced as a best seller on the weekly magazine, Shukan Asahi. There's no doubt Lost World became the most topical work since the publication of New Treasure Island. (omitted) 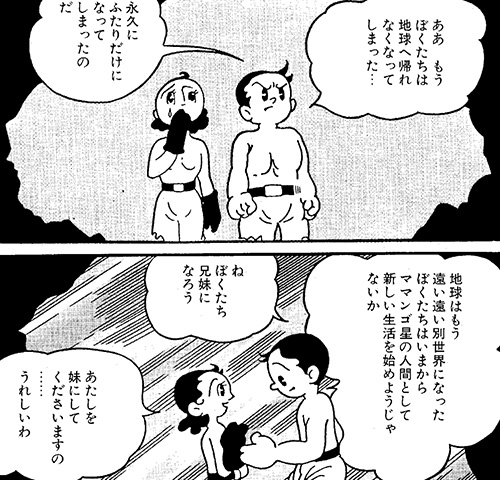 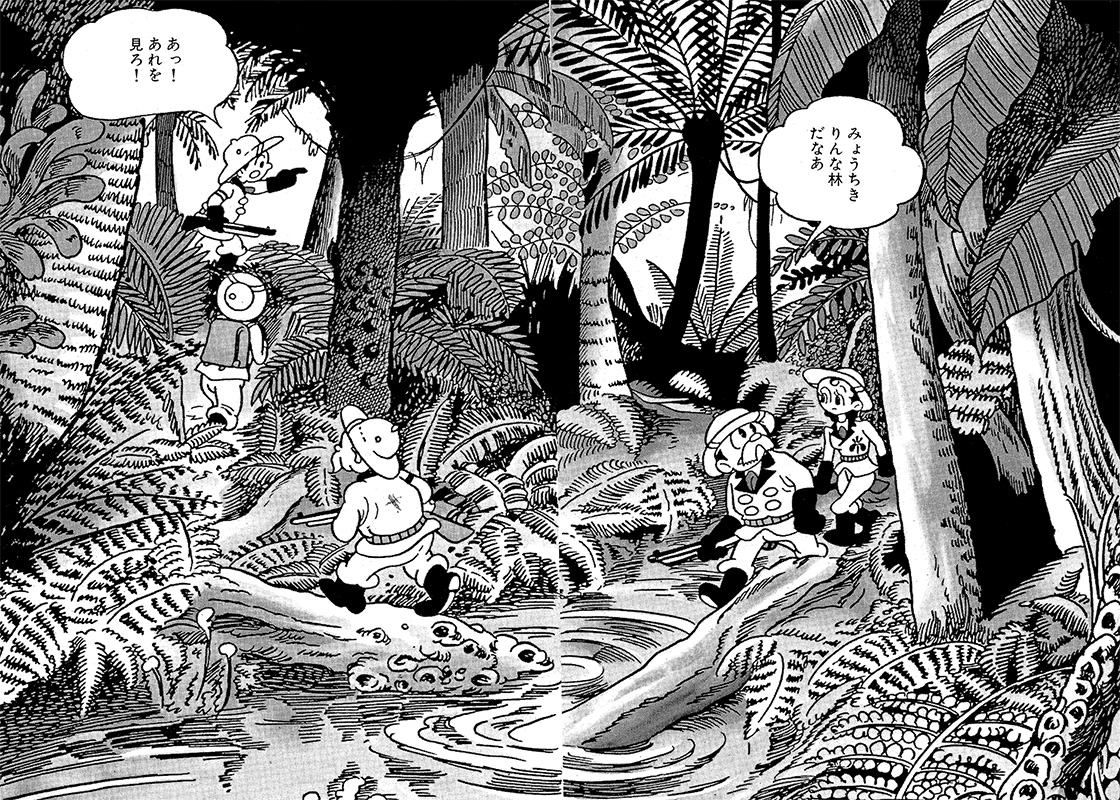