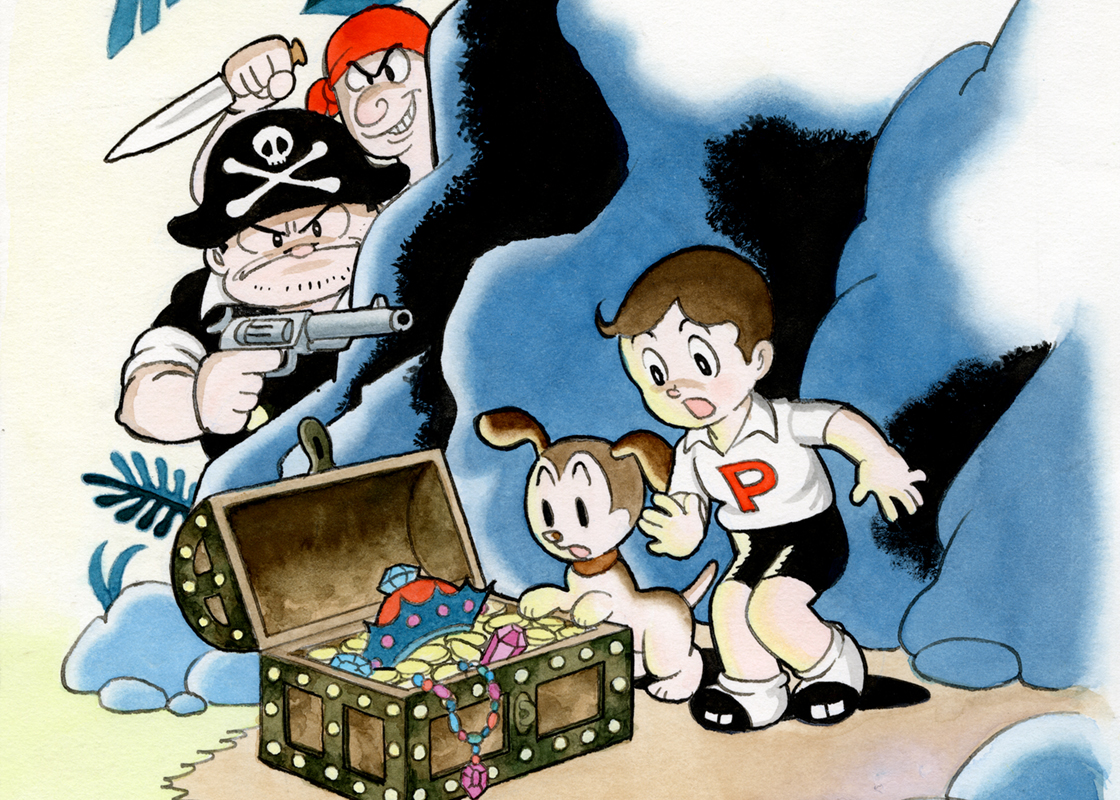 This is an adventure story of a boy looking for Treasure Island. 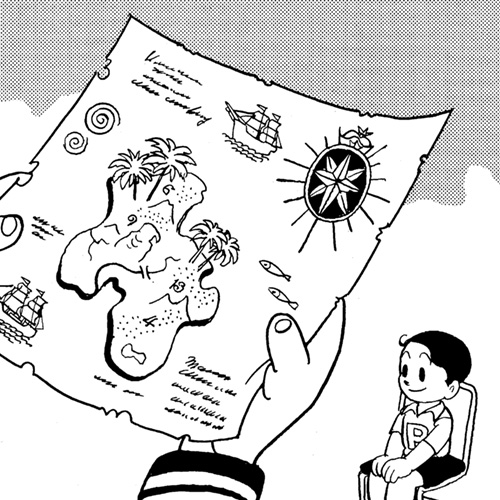 A boy by the name of Pete finds a map of Treasure Island his dead father left. He sets out to sea together with his father's friend who is a captain of a ship. Soon their ship is attacked by Pirate Boal, and the two are caught in his ship. Moreover, the ship gets beaten by a storm, and they are thrown into the ocean. After drifting about for a while, they reach an isolated island on the Southern Ocean, which is Treasure Island on his father's map. It seems they finally achieve their goal, yet another trouble waits for them. Pete is kidnapped by the natives! Will they survive and find the treasure at the end? The thrilling adventure filled with excitement continues. 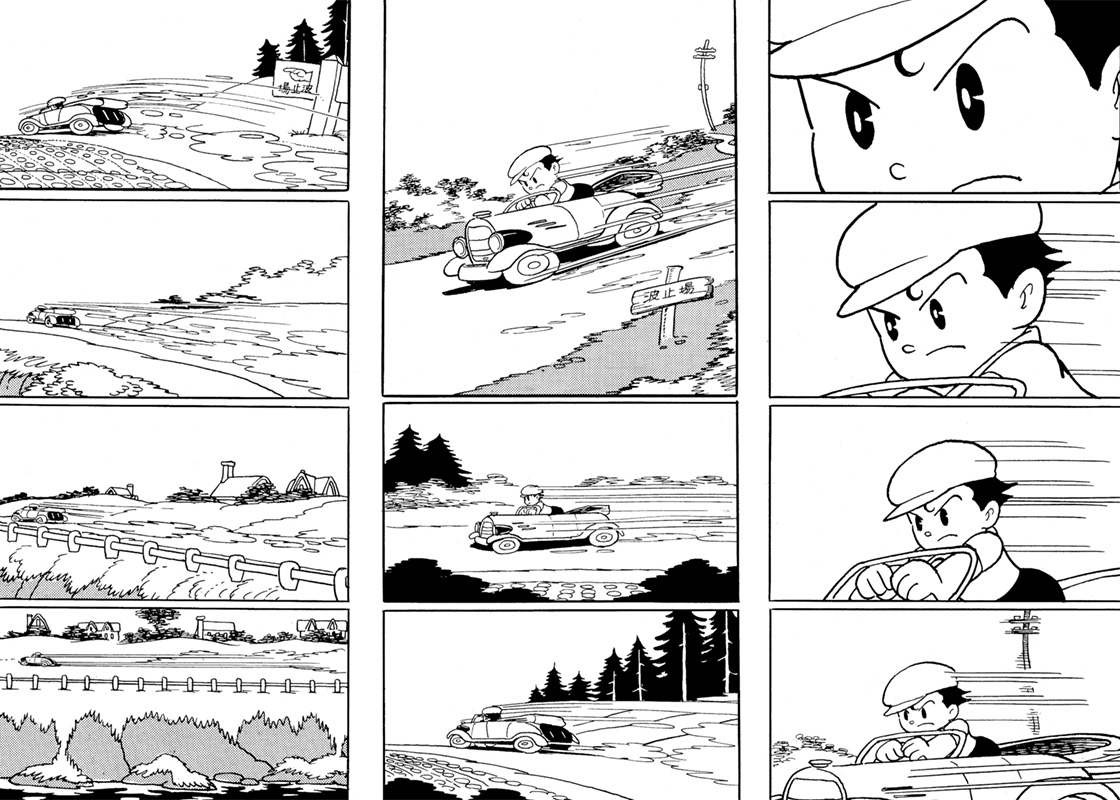 New Treasure Island was Tezuka's first manga work published in the form of a comic book. At that time, a lot of young people were astonished at the work which inspired them to become a manga artist. Indeed, it was an epoch-making work of the time although it's nothing special for today's young people. For them, it's just a simple, ordinary adventure story. But such their impression is the proof of remarkable progress of post-war Japanese manga which started with New Treasure Island. In the work, Kenichi, one of the star characters in Tezuka's early career, took the leading role of Pete, and Mr. Butamo Makeru played the captain instead of Higeoyaji who often appeared as Kenichi's uncle. 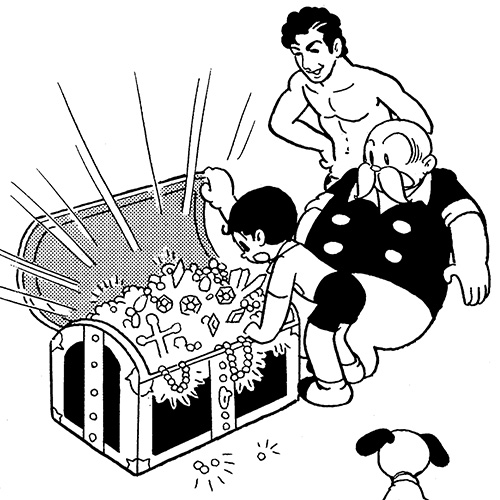 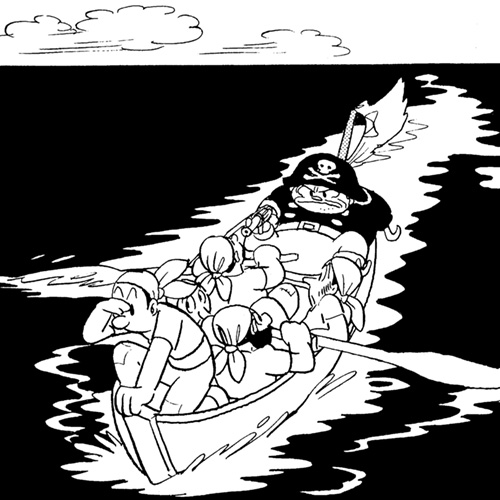 Tezuka, who was not famous yet, co-authored New Treasure Island based on the original idea by Sakai Shichima, one of the established manga artists in Osaka then, and the work became Tezuka's very first manga work published in the form of a comic book. Soon the work grew in popularity to become a best seller thanks to its Americanized illustrations and pacey compositions and sold no more than 400, 000 copies. Actually, Sakai made quite a lot of alternations on the draft by Tezuka. He cut approximately 60 pages and rewrote several lines. Accordingly, Tezuka had to author the work again based on his own memories upon the republication of the work as a part of Kodansha Tezuka Osamu Manga Compilation. 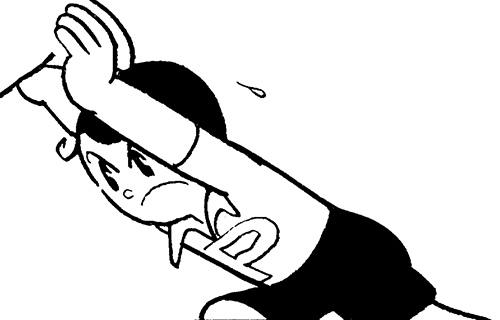 He finds an old map of an island left in his father's document box. Believing the island must be Treasure Island, he sets out to sea.
>Character/Kenichi 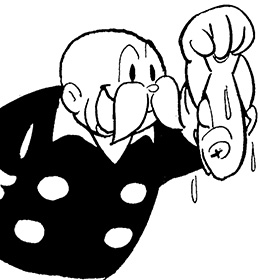 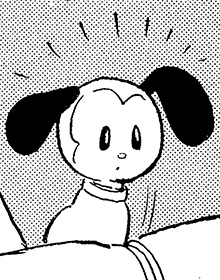 He is a captain of a ship and Pete's father's acquaintance. He sets out to sea together with Pete.
>Character/Butamo Makeru

Pan is a stray dog Pete saves on his way to the harbor. Pan also sets out to sea together with Pete and Captain. 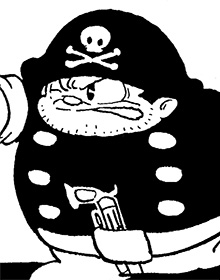 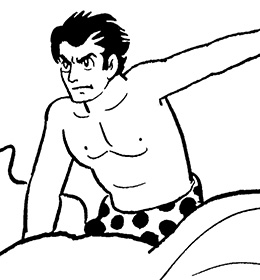 Boal is a pirate captain. He loses his one arm and one leg due to the dreadful fight with a shark.
>Character/Buku Bukk

He is the king of the jungle living on Treasure Island. 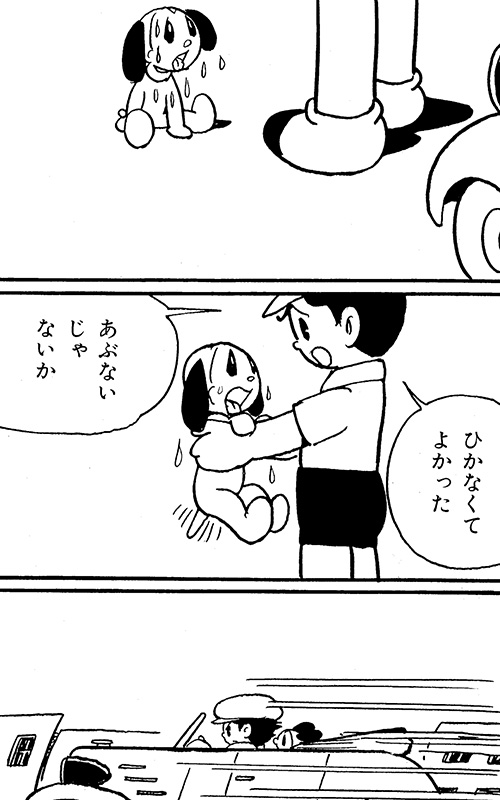 The scene of Pete saving a stray dog

(omitted)
I have to say New Treasure Island was quite different from my own version in every aspect. Although there is no point in recounting the how and why as Mr. Sakai Shichima passed away, it was him who brought me the project. He asked me to create the work on my own terms, leaving his original idea to me. As I owned him obligations especially when working together for Hallo Manga magazine, I decided to accept the offer.
Then I made the draft with illustrations on 250 sheets of coarse paper. The story started from the prologue Pete encounters a stray dog and ended at the scene he finds everything he experienced was a dream. It consisted of four parts: introduction, development, turn, and conclusion. It was a well-organized story. But Mr. Sakai cut 60 pages from the draft. He told me the work should be up to 190 pages, which was what he promised to the publisher. I could imagine the need of limiting the number of the pages, but it resulted to stretch credibility of the story. The most inconvenience was the existence of the stray dog. It became kind of a meaningless character as the scene his encounter with Pete was cut totally. Furthermore, Mr. Sakai changed some of the lines without consulting me for the purpose of maintaining the integrity of the story, also for the reason that they were too difficult. He also added some lines and illustrations without asking me. He changed facial expressions of some characters. Especially, he completely changed Tarzan's face as he said my version of Tarzan was too cartoonish. He put a piece of paper on the face and drew a completely different face on it. (omitted)

The scene of Pete saving a stray dog 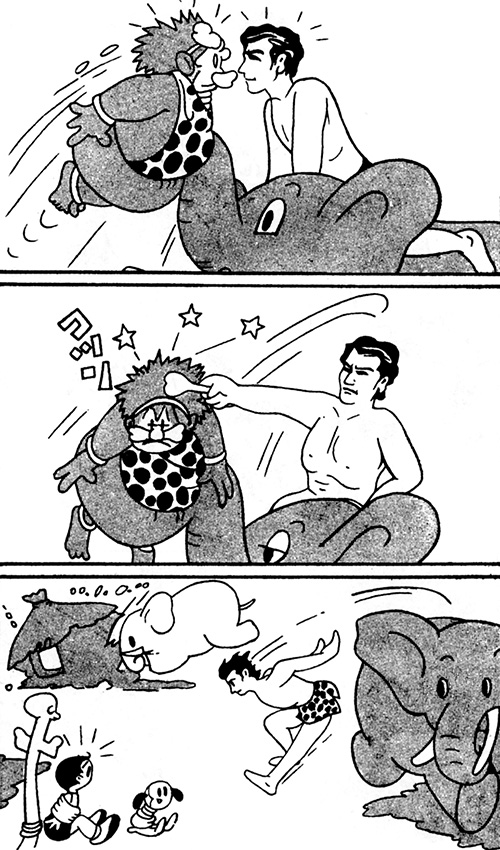 Baron (Tarzan) from the manuscripts released on 1947

There was a veteran manga artist by the name of Sakai Shichima. He was one of collateral manga artists in Kansai. Why "collateral"? Because he was not well-known publicly. He did not work for major newspapers or magazines, instead he was involved in comic magazines, animations, and activities nurturing new talents. (omitted)
I first met Mr. Sakai at a regular meeting for manga artists. It was a gathering where young manga artists showed their own work to Mr. Sakai to be commented by him, and I showed my long manga work I wrote during my school days to him. Closely looking at my work, Mr. Sakai said to me, "I have an offer for a long work from a publisher. Why don't you work with me? You draw illustrations based on my ideas, do you?" I was taken aback at his unexpected offer, but I was pleased, too. Above all, I have practiced in preparation to write a long manga work. For me, four-strip manga or single-piece manga are things on the side. A 200 pages long comic book with a frontispiece published as the first sumptuous book after the war - the project was a heaven-sent gift to me. Then, Mr. Sakai said, "I'll write a draft and draw rough illustrations. But it's just a synopsis. You can arrange my draft just as you like." Soon, I bought paper in bulk.
Once I started the work, I found my illustrations were far from satisfactory. I couldn't draw well. Maybe I was too nervous. The project, different from my previous works, was the first big work for me. I would be judged as a manga artist by public, meaning their reactions decide my future as a manga artist. The work, titled New Treasure Island, was a kind of an action story like a mixture of Treasure Island by Stevenson, Robinson Crusoe, and Tarzan.
The problem was Tarzan. I was totally at a loss. As I got very skinny then, I could not have an image of Tarzan with strong muscles. All my versions of Tarzan were scrawny. I finally gave up and draw the character roughly. That's why Mr. Sakai put a piece of paper on the character and re-drew it by himself later. (omitted)

Baron (Tarzan) from the manuscripts released on 1947 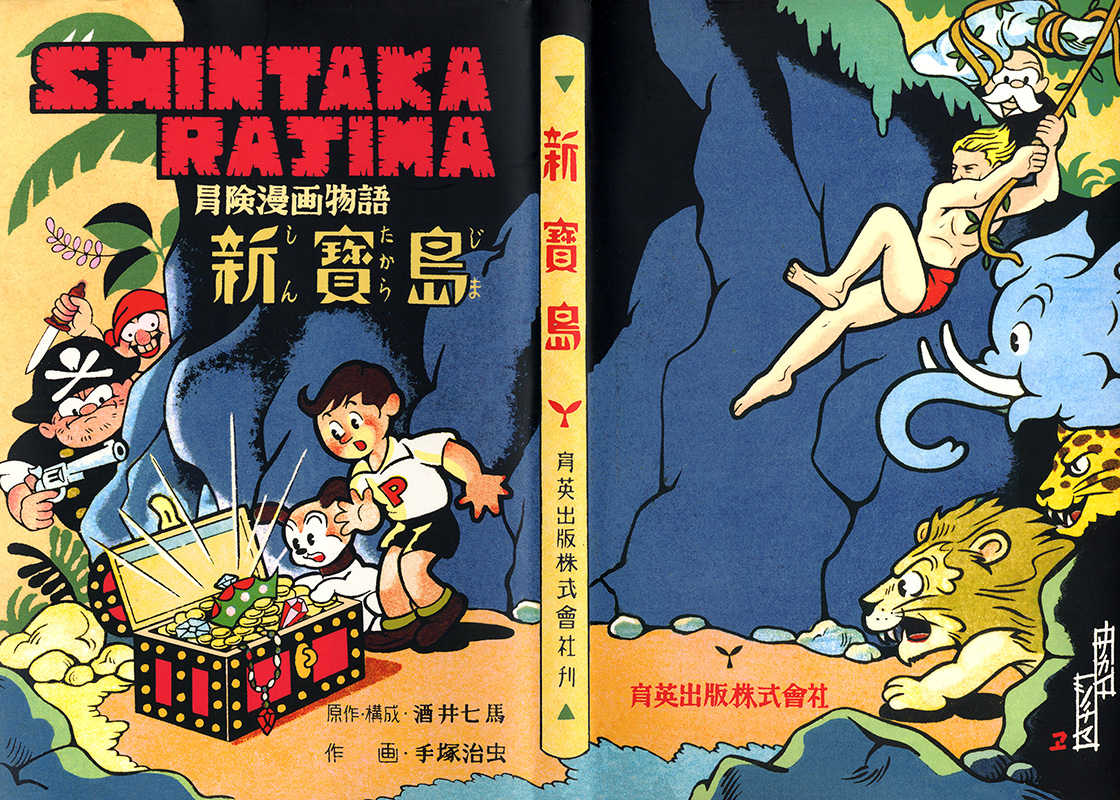