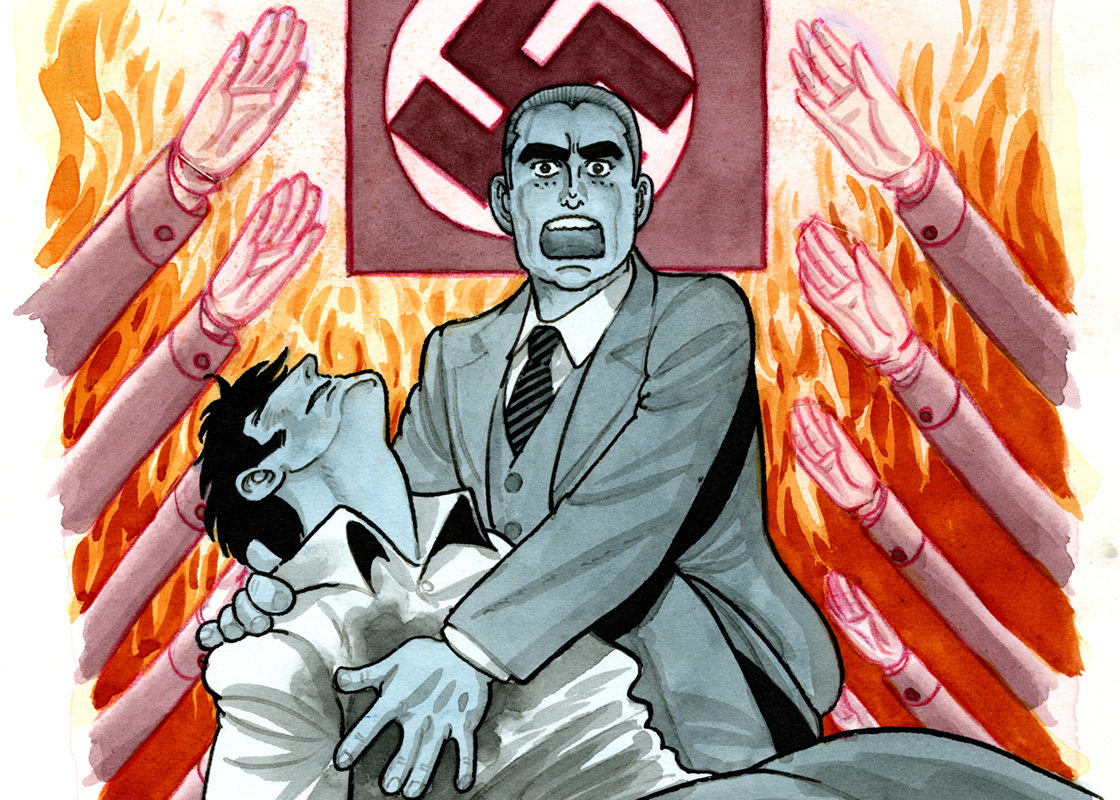 This is a full-length manga work set in Japan and Germany during WW2, featuring the life of three men all by name of Adolf. 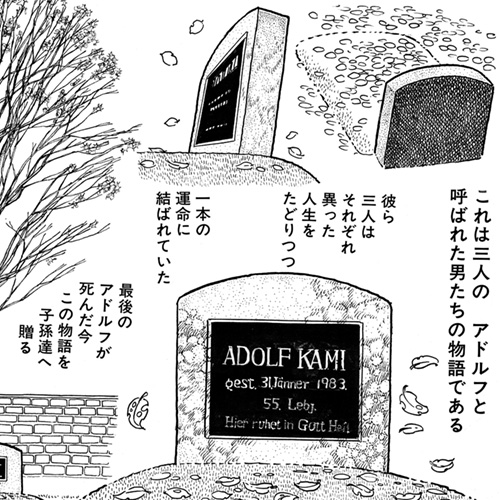 In 1936. Toge Sohei visits Germany to cover Berlin Olympic Games, where he finds his younger brother studying in Berlin was murdered. Then, the reason of his death is revealed. He was killed due to a letter he sent to Japan. In the letter Adolf Hitler's birth secret that he was a part Jew was written. On the other hand, Wolfgang Kaufmann, an officer at German Consulate in Kobe is searching whereabouts of the letter by order of the country. Kaufmann has a son by name of Adolf, and tries to raise his son as a 100% nationalist. But his son is hostile against Nazi's idea of killing Jew since his close friend is Jew. Under the dictatorship of Adolf Hitler, the lives of two Adolf are distorted gradually whether they like it or not. 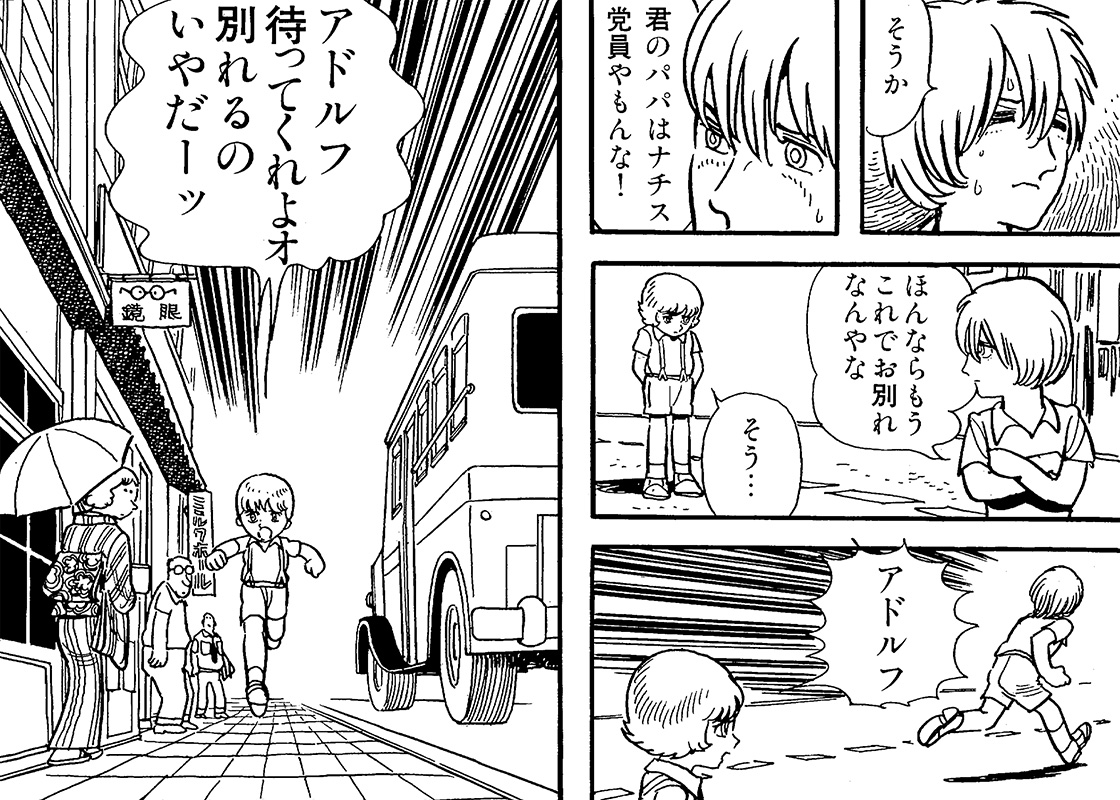 What if the true identity of Adolf Hitler, the worst dictator in the 20th century who hated all the races except Aryan and oppressed and slaughtered Jew, were actually Jew? What if there were a letter certifying his identity as Jew? Three Adolf is a great saga developed along with such fiction. While weaving fictional elements, Tezuka had real-life figures, historical events and real places in Kobe appear a lot in the work, which helped increase the reality of the story. He also reflected his own experience and thought on war and incorporated songs, manners, and games played by children then in detail. Readers of the work would find it more interesting through reading it again and again. It' s also recommended to read a series of his works, including A Tree in the Sun, Shumari, Ikki Mandala, Three Adolf, Dotsuitare, Ayako and MW, along with the time line from end of Edo era to Showa era (1850-1980). 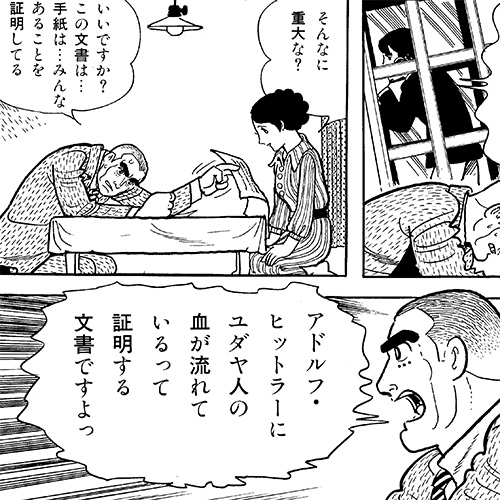 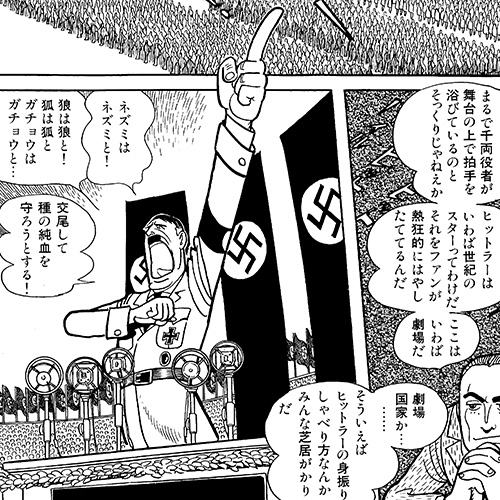 This work was serialized not on a comic magazine, but on Shukan Bunshun, a weekly general magazine for adults. Upon the serialization, Tezuka responded the chief editor's request for a strikingly serious work. Therefore, he made it especially serious and intense compared to his other works for adults. The scenes in Japan were mainly developed in Kansai area where Tezuka spent his childhood days in the war and in the post-war period. He well depicted atmosphere of Kobe then, which would be one of the highlights of the work. Actually, he was hospitalized while the serialization of the latter half, so quite a lot of episodes were omitted from the serialization. Tezuka later added those omitted episodes upon the publication of the comic book version. 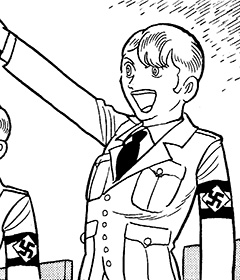 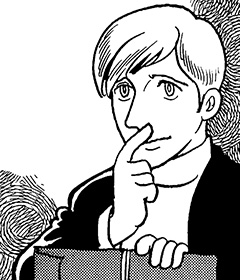 Adolf Kaufmann is a son of a German diplomat and a Japanese woman. He is shy and generous and becomes close friends with Adolf Kamil, a hard-nosed Jew boy, after saved by Kamil several times. Then he is forced to go to Germany by his father and his men. He enters AHS, being brainwashed into believing Nazism.

Adolf Kamil is a son of a Jew bakery in Kobe. He happens to eavesdrop that adults are talking about the birth secret of Adolf Hitler, and comes to be involved in a conspiracy over the secret. 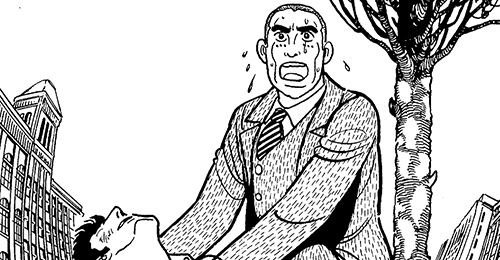 Toge Sohei is a reporter of Kyodo News. He visits Germany to cover Berlin Olympic Games. During his stay in Germany, Isao, his younger brother studying in Germany is murdered. Through searching the reason of Isao's death, he reaches a letter which certifies the birth secret of Adolf Hiter, and comes to be chased by Gestapo. He is fluent in German and English, and a former athlete of W University, especially good at marathon. 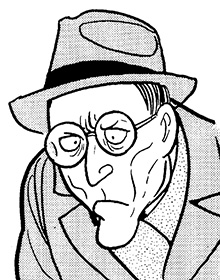 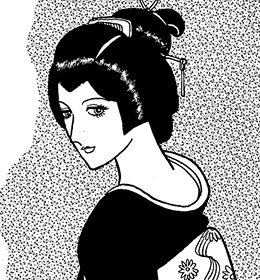 Yoneyama is a manager of the 1st investigation team of Hyogo Prefectural Police. He used to be in charge of a murder case of a Geisha girl Kinuko whose body was found in Gotenyama. During the investigation of the case, he sensed that Wolfgang Kaufmann, the father of Adolf Kaufmann, was guilty.

Kinuko is a Geisha girl who belongs to a Geisha house Yoshigiku located in Arima hot spring. 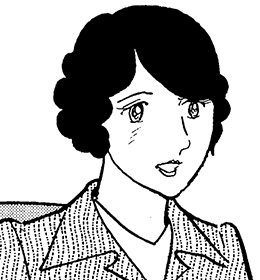 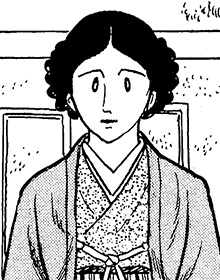 Yukie is Adolf Kaufmann's mother. She meets Wolfgang Kaufmann, Adolf's father at a horse-riding club. But she develops a feeling of distrust for him after Kinuko's murder case. She, then, encounters Toge Sohei chased by Special Police, and comes to care about him. She also saves his life several times.

Noriko is an elementary school teacher of Adolf Kamil. She is eyed by Special Police due to her poet against war. Toge Isao leaves the secret document about Adolf Hitler to Noriko. 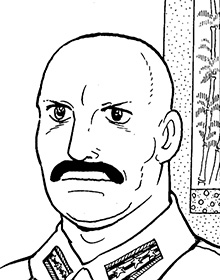 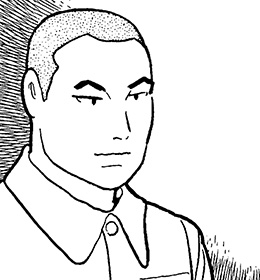 Honda is a Colonel of Special Police. He has known Yukie since his childhood and once gave his heart to her. Asked by Yukie, he saves Sohei arrested by Special Police. But he doesn't think much of Sohei who is developing a relationship with Yukie.

Yoshio is Colonel Honda's son. He is an aspired military man, and leaks confidential information of Japanese military to Sorge, a Soviet spy through his father. 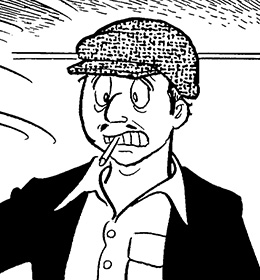 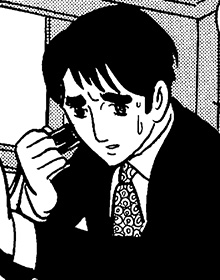 Akabane is a Inspector of Special Police. He suspects Ogi Noriko and Toge Sohei as anti-nationalists and seeks the secret document as well. While chasing Sohei, he gets injured heavily, which results to damage his brain. Although he is in a demented state, he keeps alive.
>Character/Ham Egg

Isao is Sohei's younger brother. While studying in Berlin, he is murdered by Gestapo due to his plan to turnover Nazi with a letter which verifies the birth secret of Hitler. He was in love with Rose who was a Nazi sympathizer. 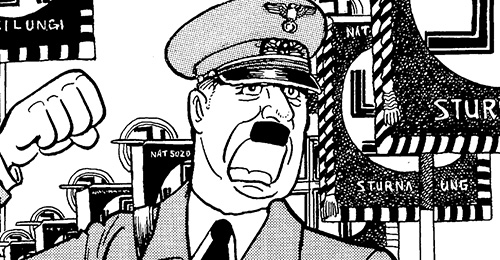 Adolf Hitler, Fuhrer of Nazi and the dictator, made Germany out to a theatrical nation and implemented policy of persecution and slaughter of Jew. In the setting of this work, he is a son of Jew, and there is a letter written by his mother which certifies his birth secret. He used to dream of becoming an architect, but he comes to hate rich Jew capitalists due to his experience during his hard school days. He is very skeptical and short-tempered, hating and looking down on all races except Aryan. 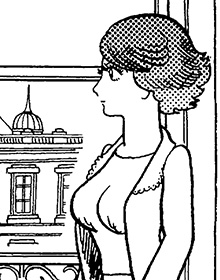 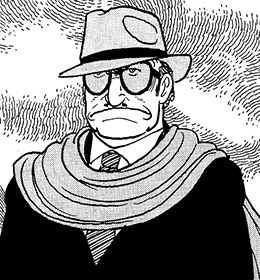 Rose is Acetylene Lamp's daughter and Isao's girlfriend. She introduces herself as Linda Waver to Sohei, using a false name. She is the one who has betrayed Isao and secretly provided Nazi with his information.

Acetylene Lamp, the head of the Far East Intelligence Authority of Gestapo, is a cold and implacable man. Upon catching the information that Isao has the secret document, he arrests and tortures Sohei who searches for the reason of Isao's death. Then he follows Sohei to Japan.
>Character/Acetylene Lamp 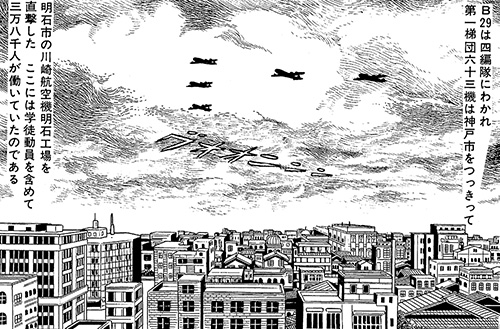 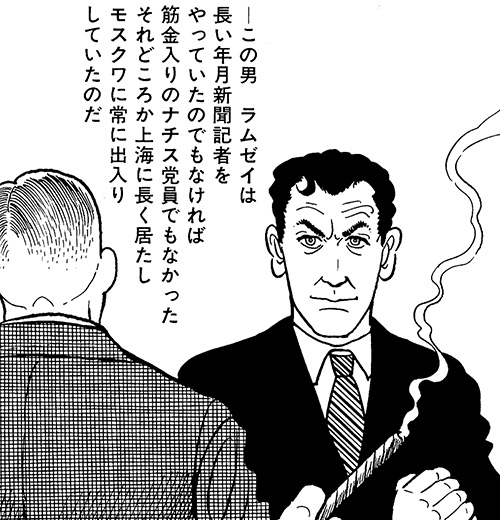 (previous part omitted)
First, I thought of short-short stories for the serialization. But the chief editor told me he expected me to author a serious long story. So, I told him some ideas which just came up to mind, and said without any plan, "I want to write a story set in Kobe, a symbolic place for my youth". The chief editor liked the idea, so we decided to have a story set in Kobe on the moment.
So far, stories of Kansai before and during war period, especially under the air strike, have been seldom covered in books. That's why we agreed to have something based on my war memories. But that lacks impact. It's like a bland dish. We need a main dish to satisfy readers' appetite. Then I came up with an idea to add Hitler's episode. I also wanted to write about Sorge very much, and contacted Mr. Ozaki Hideki. According to him, Sorge's profile is not settled, still changing, and it will take more time until his true being is revealed. Although my first idea was to have Sorge as the main character, I decided to build a plot focusing the time instead, also with episodes of Hitler and air strikes in Kobe, and make two Adolf survive through the war and fight at the end of the story.
In addition, I decided to have adults as main characters from the beginning. You know, if we have a boy as a hero from the beginning, people tend to consider the story as one for young boys. Then, I decided to make Toge Sohei appear as a narrative character who is also involved in romance as well as thrilling incidents. Plus, I decided to make it a mystery manga, beginning like a semi-documentary. Thus, I fixed my ideas gradually. Since I was offered the work about three months before the serialization, I had enough time to think about the plot. (the latter part omitted) 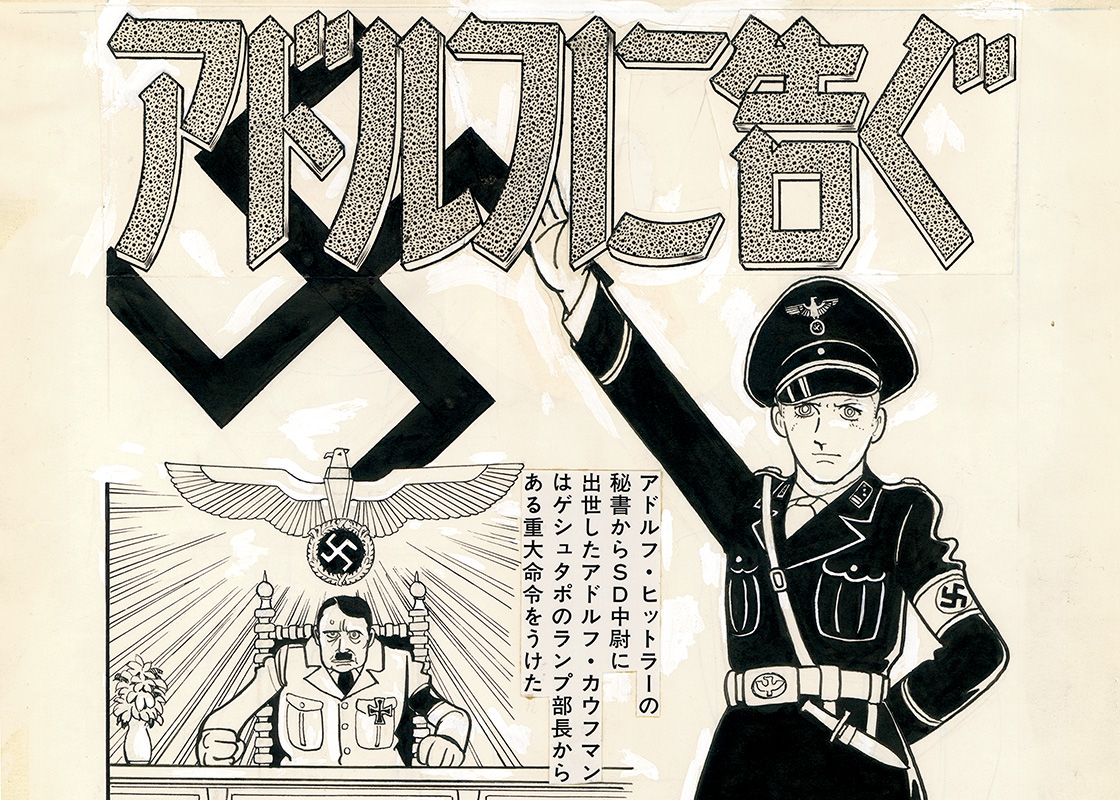