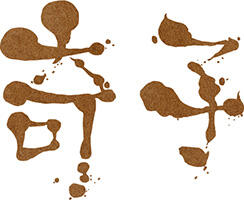 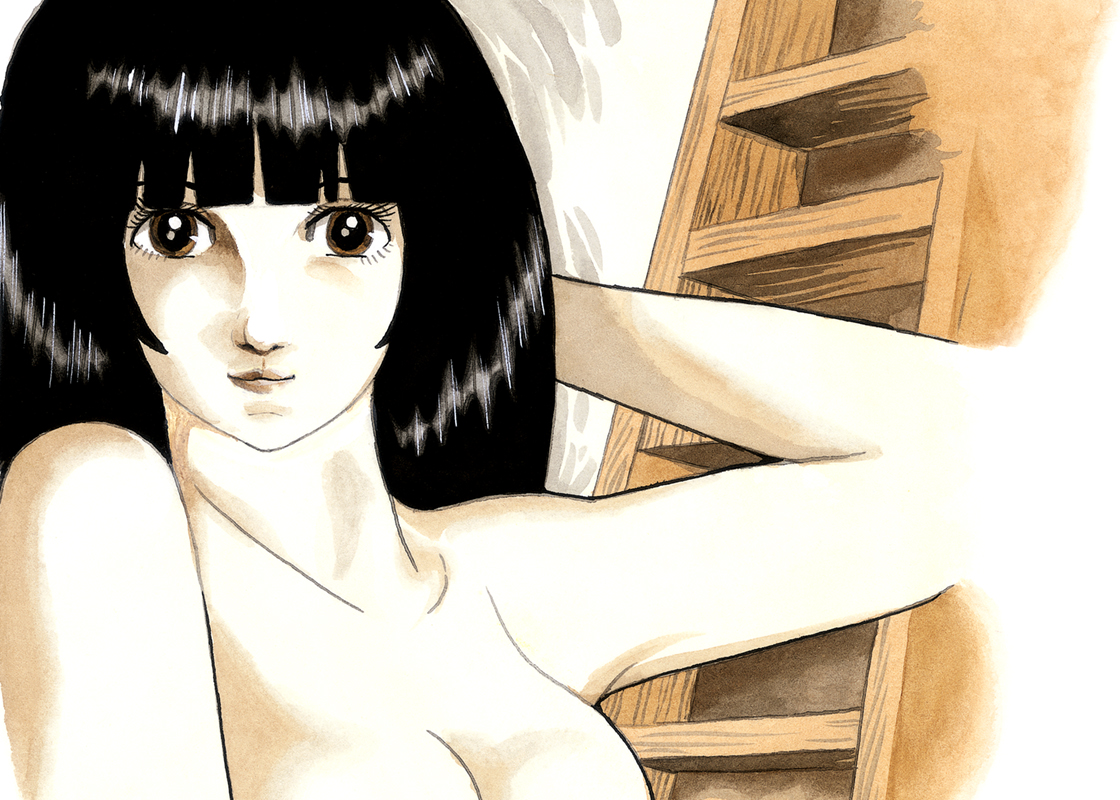 This is a drama featuring an old Japanese family collapsing along with the dramatic change of Japanese society after the Pacific war. 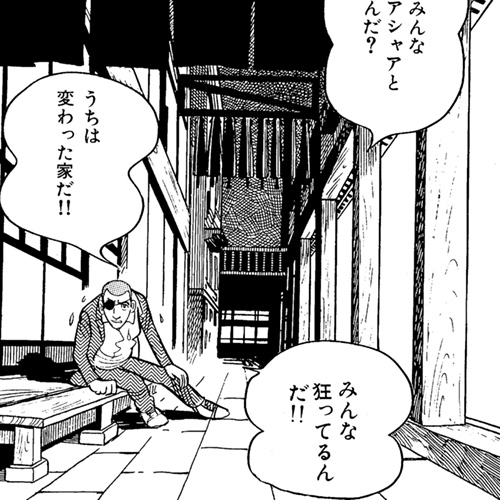 Ayako is the youngest daughter of Tenge Sakuemon, the head of the Tenge family that owns a lot of land in Tohoku. Actually, she is an illicit child between Sakuemon and Sue, the wife of Sakuemon's eldest son by the name of Ichiro. One day Jiro, the second son of Sakuemon returns from the war and gets engaged in the assassination of the division head of a left-wing party by order of GHQ. But he is witnessed his washing a blood-spattered shirt by Ayako and Oryo. Accordingly, he murders Oryo out of need. Ichiro, afraid of damaging the family name by having a criminal from the family, decides to let Jiro get away and confine Ayako in the store house though her life. Several years later, the store house where Ayako has been kept comes to be destroyed due to a road construction. Finally, Ayako is released and sees the outer world for the first time in 20 years. The outer world filled with human lust seems awfully ugly to Ayako as she has grown up with an innocent girl's mind. 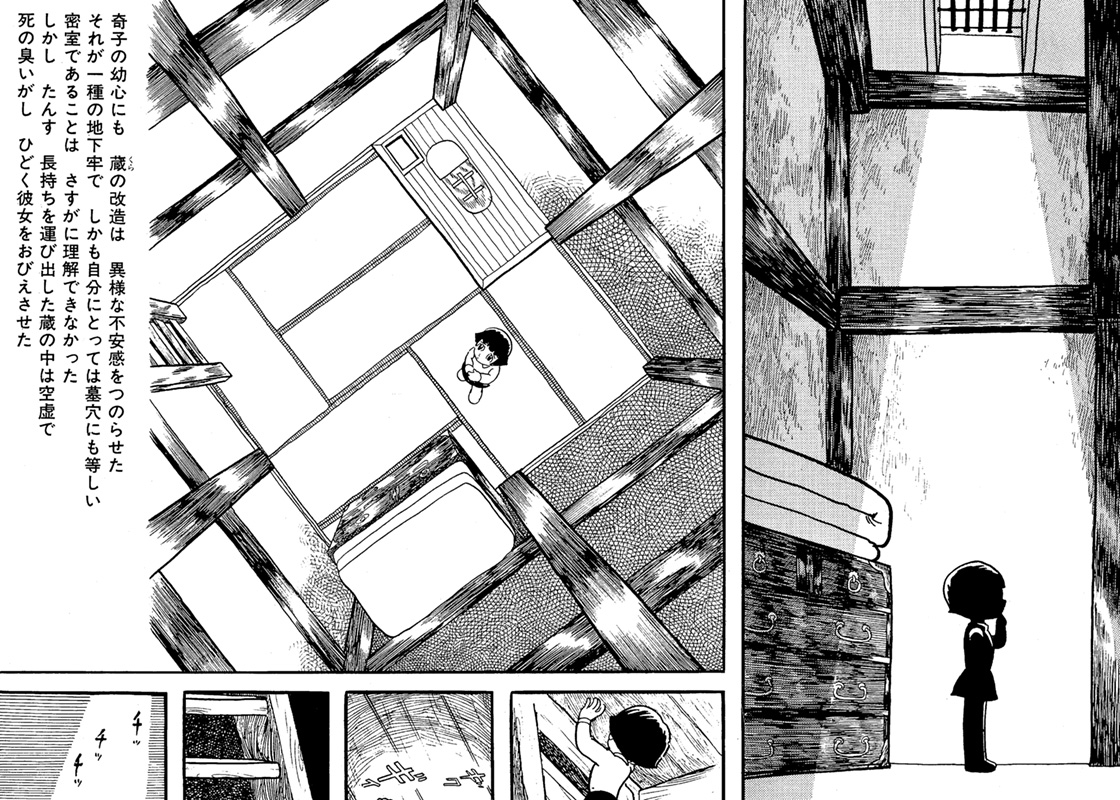 The work features a sense of stagnation under occupied Japan and a sense of anguish among Japanese people forced to change their existing values as the citizens of the defeated nation. The collapse of the Tenge family as a big land owner in Aomori, the labor movement in the post-war period, and the conspiracy involving GHQ - all those elements were woven into the plot beautifully.
According to Tezuka, he initially had a plan to make Ayako a larger-scaled work to depict the vitality of Japanese people then. If such his plan had been realized, we could have witnessed how Ayako gets old and how innocently but cleverly she lives. By the way, Tezuka featured the theme about the identity of Japanese in Gringo, too. The main character of Gringo lives toughly in the strange land, who was totally different from Ayako, though. Yet we can see something common in both characters. 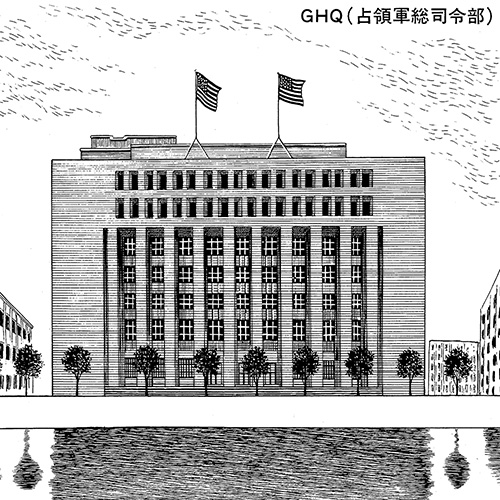 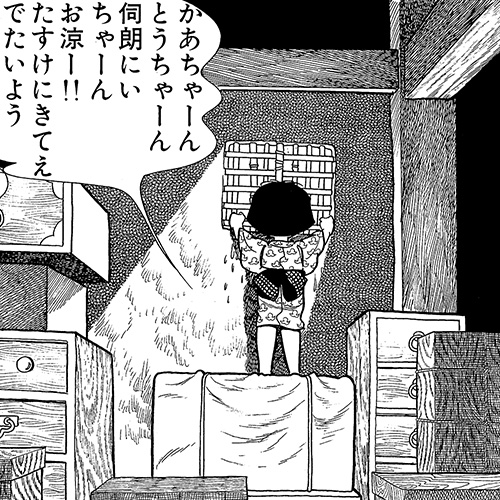 After losing the Pacific War in 1945, Japan experienced the collapse of the existing values, forced to make a change toward a new era. As a part of democratization by the allied powers led by the U.S., the land reform was pushed in rural areas, and the Japanese government compulsorily purchased the land over a certain size from the owners and sold such land to tenant farmers. Accordingly, Japanese local land owners lost their power.
In this work Tezuka highlighted such time by depicting the life of a girl locked in the store house. He also included the murder case of the director general of Japan National Railway in the story, which reminds the readers of the actual case in 1949 known as Shimoyama case, the mysterious death of the first director general of Japan National Railway by the name of Shimoyama Sadanori. It's said he died in a railway accident, but some said he was murdered while some said he killed himself. Furthermore, there was a rumor he was murdered by GHQ. Yet the truth has not been revealed. 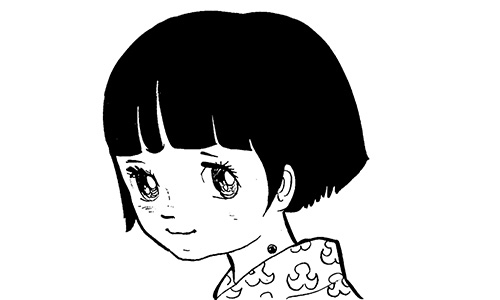 She is the daughter born between Tenge Sakuemon and Sue, but she is registered as the daughter between Sakuemon and his wife, Iba. When she is four years old, she witnesses the evidence of Yodoyama case with Oryo. But in order to protect the family name, her testimony is buried. Then she is locked in the store house through her life. 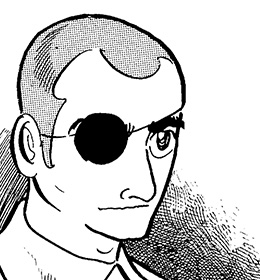 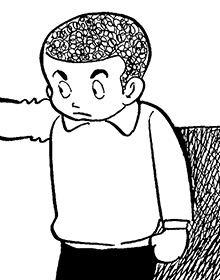 He is the second son of Tenge Sakuemon, a big land owner in Kamigata town in Yamanaka city, Aomori. He returns to Japan after being captured by the U.S. military in Manila during war time and becomes GHQ spy. Then he is involved in the murder case of Eno Tadashi, the head of Yodoyama Division of Minshin Party, which is said conspired by GHQ (known as Yodoyama case). Eventually he is placed on the wanted list and finally cut off from the family. He leaves to Osaka and comes to identify himself as Yutenji Tomio belonging to Oshinkai.

He is the third son of Tenge Sakuemon and a bright young man. He suspects Jiro as the criminal of Yodoyama case. He is the only family member who is against locking Ayako in the store house, insisting to accuse Jiro. 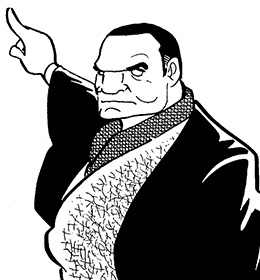 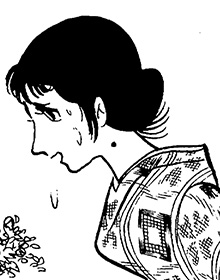 He is the eldest son of Tenge Sakuemon and an egocentric man who does anything to take over the family estate. He even gives his wife to his father for the purpose. He practically becomes the head of the family after Sakuemon is confined to bed due to a brain stroke, but has no knowledge and power to lead the family.

Sue is Ichiro's beautiful wife who married to him when she was 17 years old ordered by Sakuemon. Later she is pregnant by Sakuemon, exploited by his husband who plans to take over the family. She is too obedient and old-fashioned to accept anything. 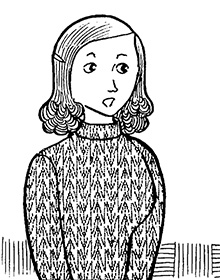 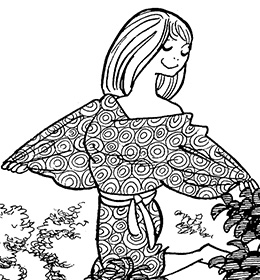 She is the eldest daughter of Tenge Sakuemon and a bright and smart woman loved by everybody. Eno Tadashi, the head of Yodoyama division of Minshin party is her boyfriend, and Naoko herself is a member of the party. She leaves the family, virtually repudiated.

She is a daughter of a tenant farmer by the name of Gosuke who serves for the Tenge family. Later it turns out her birth father is Sakuemon who raped Gosuke's wife. She gets along with Ayako well, but is killed by Jiro. 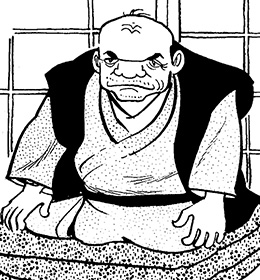 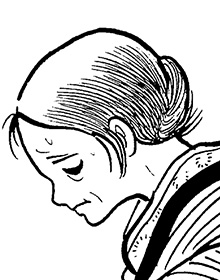 He is the head of the Tenge family with the strong power to make all his family members obey him. According to Jiro, Sakuemon is an arrogant, egoistic, dissolute, nympho, irreverent, skeptic and Machiavellian man, and any insulting adjectives perfectly fits him. He also judges his family members privately. Despite such his acts, nobody can claim against him even if he rapes his son's wife or tenant farmer's wife. Even after he is confined to bed due to a brain stroke, he keeps control of the family.

She is Sakuemon's obedient wife and a kind mother for her children. She does not say a word no matter what her husband does. 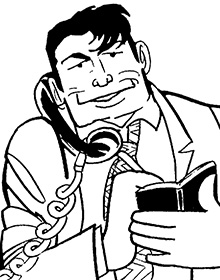 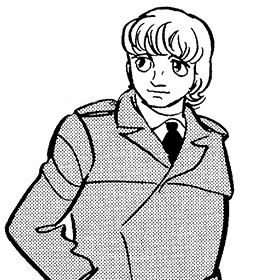 He is a detective who used to investigate Shimokawa case that President of Japan National Railway was found murdered after missing. Now he is in charge of Yodoyama case, and finds out the two cases have something in common.

He is Captain Geta's only son. Later he falls in love with Ayako. 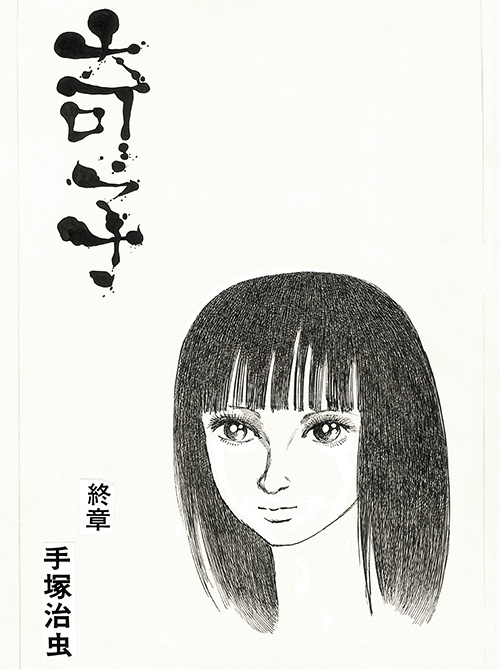 (Excerpt from afterwards of Ayako, vol.3 of Tezuka Osamu Manga Compilation by Kodansha)

Ayako was serialized on Big Comic for a year and a half. It was originally planned as a longer work, though, I had to finish it in the middle due to unavoidable reasons. It was nothing to do with my health condition or running out of ideas. Although the part serialized was supposed to be just the prologue, I thought I could wrap it up pretty well. My original plan was to write about complicated relationships within a family, like The Brothers Karamazov, developed in Japanese post war history. But if I had focused on the history too much, the work would have become a list of historical events. Instead, I exploited the Tenge family to depict Japanese people living energetically even in the middle of confusion and conflict brought by relentless invasion of post-war ideology. I ended the work short enough to be contained in three volumes. But I want to write the rest of the story including that of Ayako who was born with a strange destiny. I am willing to write it. Someday I would like to publish it under a different title. (omitted) 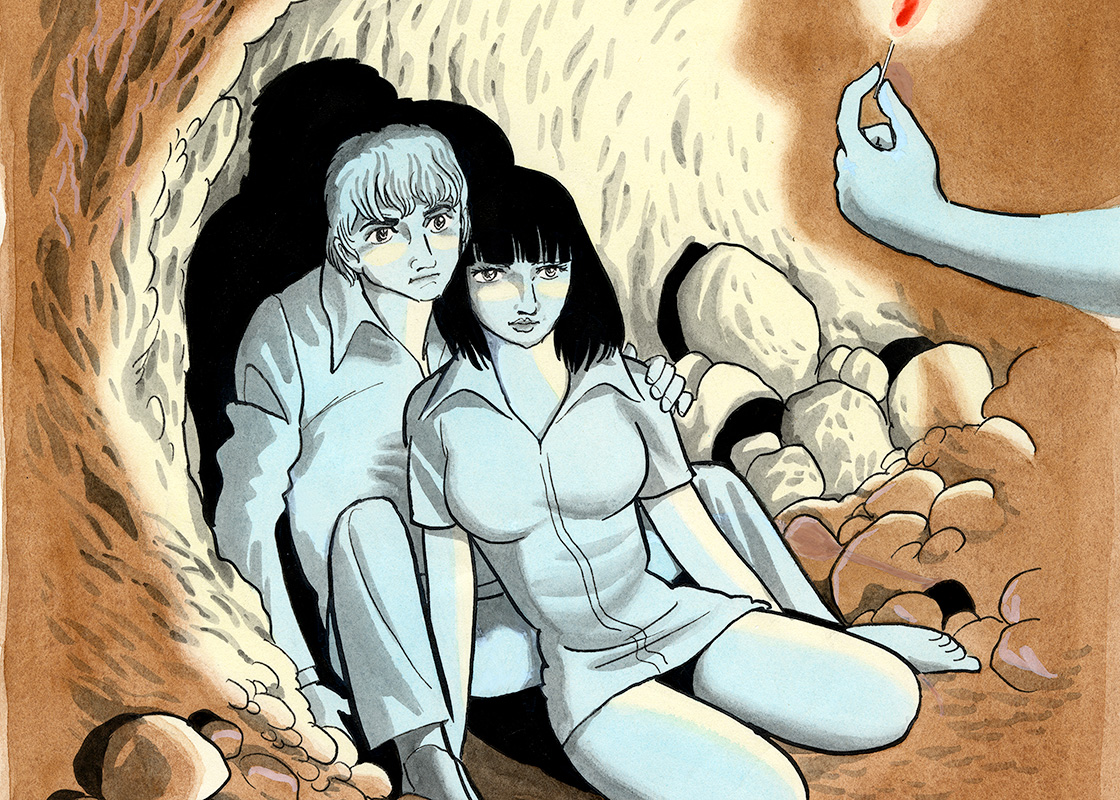