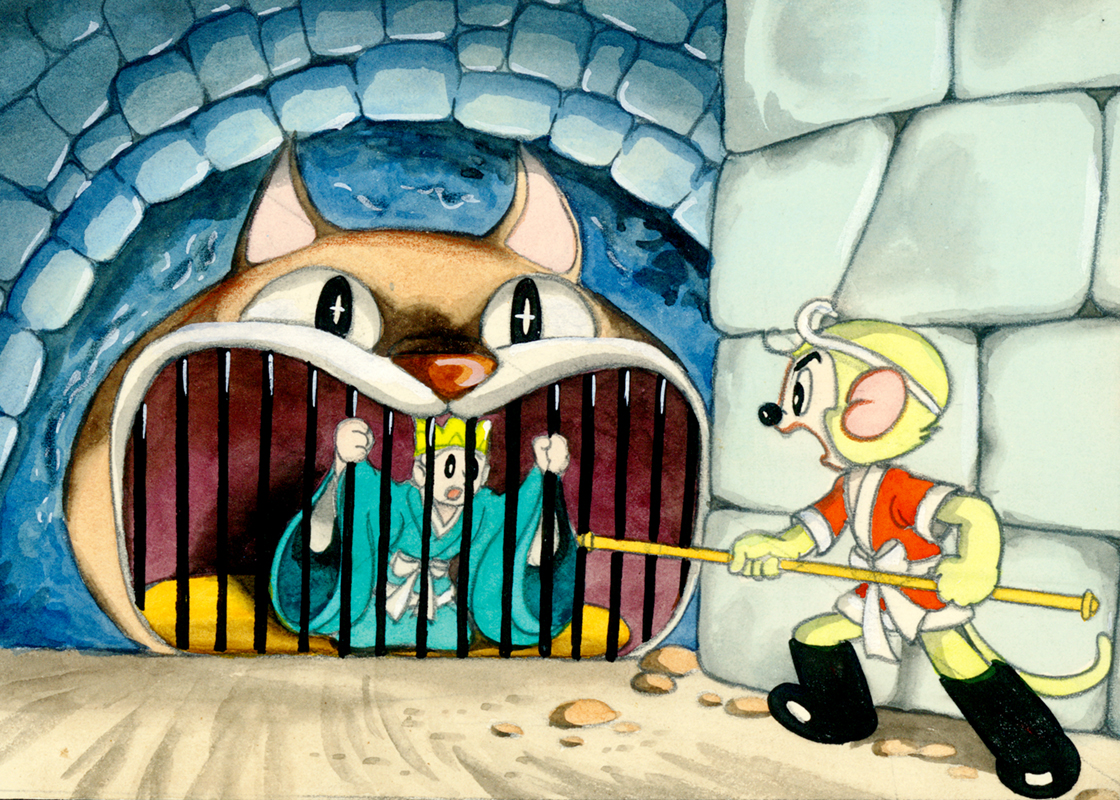 This is a manga adaptation by Tezuka of Journey to the West. A monkey with a super power travels together with Monk Sanzo while getting rid of demons. 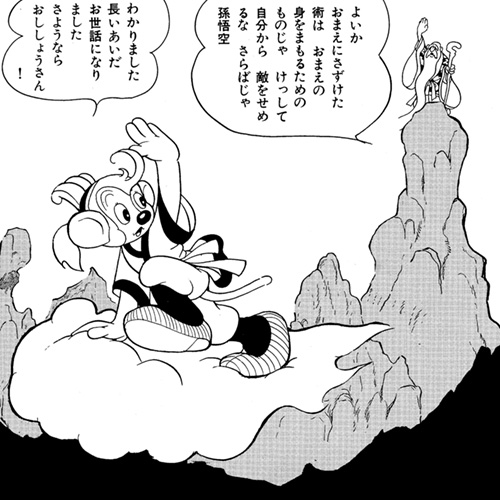 2000 years ago, in China. A golden monkey is born from a stone located at the summit of Mt. Kakazan. The monkey is very brave and smart, and later becomes a disciple of a hermit to learn magic from him. The monkey, however, is locked in the rock jail by Buddha since he acts violently in heaven. 500 years later, a noble monk by the name of Sanzo, who is on his way to India to receive Buddhism scriptures by orders of the king, passes by the jail. Sazno saves the monkey from the jail and names him Son Goku. Then, Son Goku accompanies Sanzo to India. On their way, Goku defeats Cho Hakkai, a monster who looks like a pig, and Sa Gojo, a monster who looks like a legendary monster called Kappa, and makes them Sanzo's servants. Sanzo and the three wizard servants continue their adventurous journey to India. 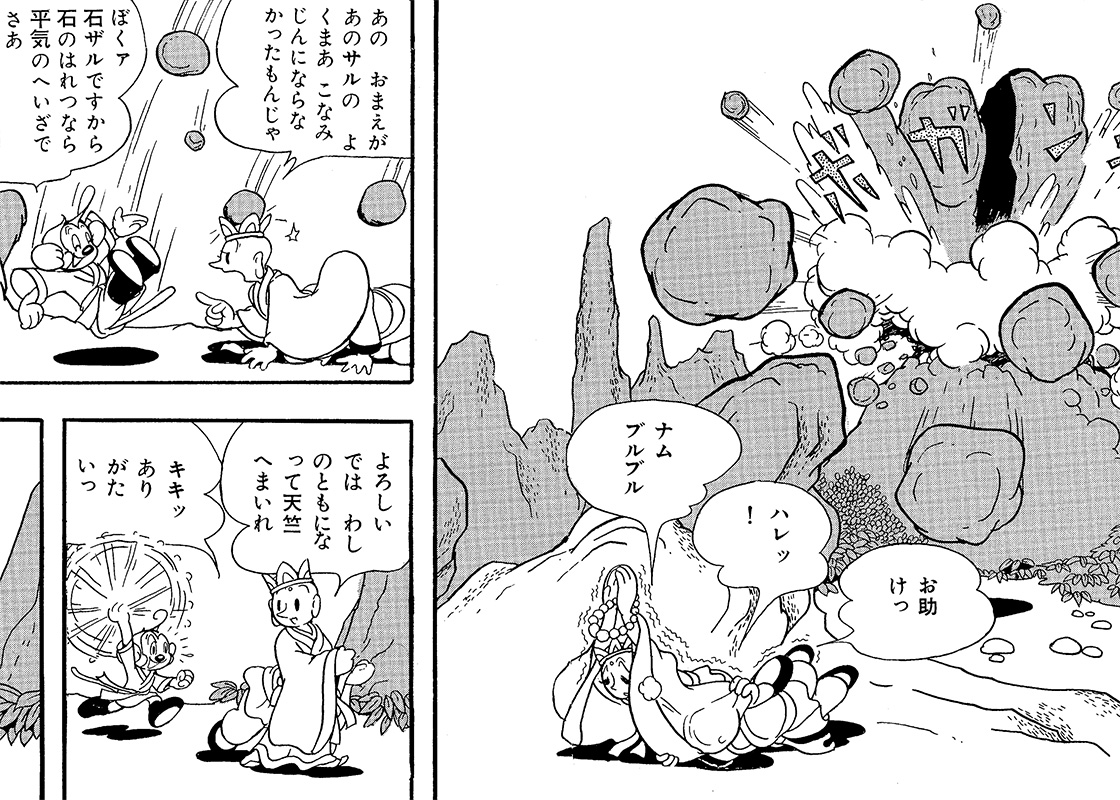 Tezuka adapted Journey to West, known as one of the four unusual books in China, and also known as a book written with slang expressions, into a manga work easy for children. He interpreted the epic but anything-goes story closely and added new twists to it so that children then could enjoy. He also depicted several monsters in the work in a way not only ominous but also somehow humorous and parodic. In the scenes of the magical fights between Goku and those monsters, Tezuka introduced anything, even cement and DTT. What was more, he made Goku and other characters fly out from the frames, making them get everything their own way even allowing to involve the author in the story. 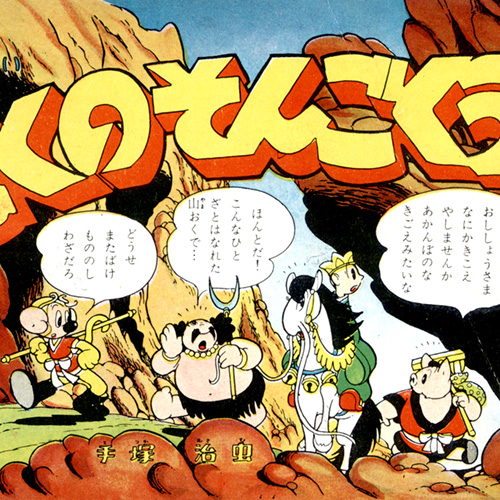 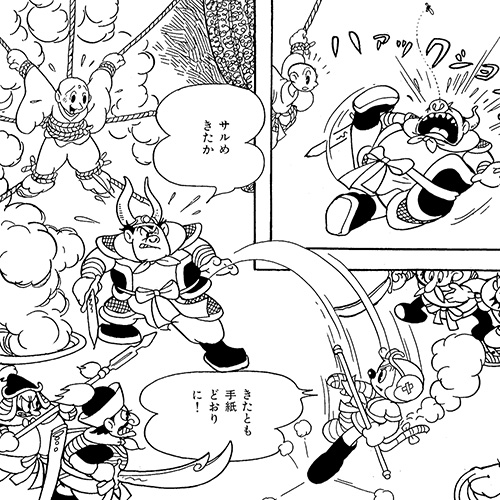 The work which appeared on the second issue of the magazine, Mangao continued up to 98 times for the period of 8 years, always put at the top in color. Tezuka freely showed his talent of gag manga in this work although it resulted that the work deviated from the original significantly. By the way, it's well known that Tezuka was deeply influenced ty Tessen Koshu, a Chinese first feature animation film released in 1942 in Japan, and the influence was clearly seen in the scene of the fight at Mt. Kakazan. In 1958, Tezuka received an offer to turn My Son Goku into animation from Toei Doga, and it became his first animation work. However, the completed feature animation film titled Saiyuki (1960) was completely different from the original work. In 1967, another animation work, Goku no Daiboken (Goku's Great Adventures) was produced by Mushi Production, which was also totally different from the original.

He is a monkey born from a huge stone at the summit of Mr. Kakazan. When he was born, his fur was shining gold. He becomes the king of monkeys, living in a mansion given by a servant of King Dragon. He, then, visits a hermit to learn magic arts, hoping to be superior to humans. After mastering magic, he becomes arrogant to act violently using his power. Accordingly, Buddha, angry at him, locked Goku in Mt. Gogyozan.
>Character/Goku 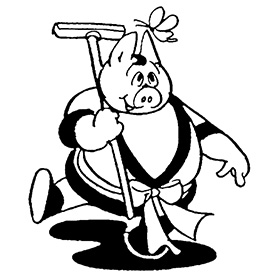 He used to be Great General guarding Milky Way. But he falls on the lower world with an appearance of a pig thanks to his greediness. Cho Hakkai, then, tries to marry a daughter from a rich family, but his true identity as a monster is exposed. He becomes a servant of Sanzo after beaten by Son Goku.

He is a monster and a thief living in the Ryusa River. He robs clothes from people because he just wants to look stylish in beautiful clothes. He becomes a servant of Sanzo after beaten by Son Goku. 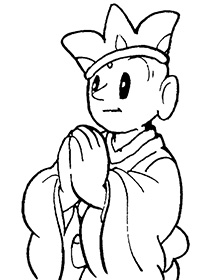 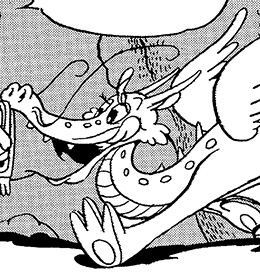 He is a monk traveling to India to receive Buddhism scriptures. As predicted by Kannon, he rescues Son Goku locked in Mt. Gogyozan. He is almost kidnapped and eaten by monsters again and again.

She is the youngest daughter of Tokai Ryuo (the king of Dragon). She eats Monk Sanzo's horse on her way leaving home. Then she becomes a servant of Sanzo after beaten by Son Goku. She turns herself into a horse for Monk Sanzo. 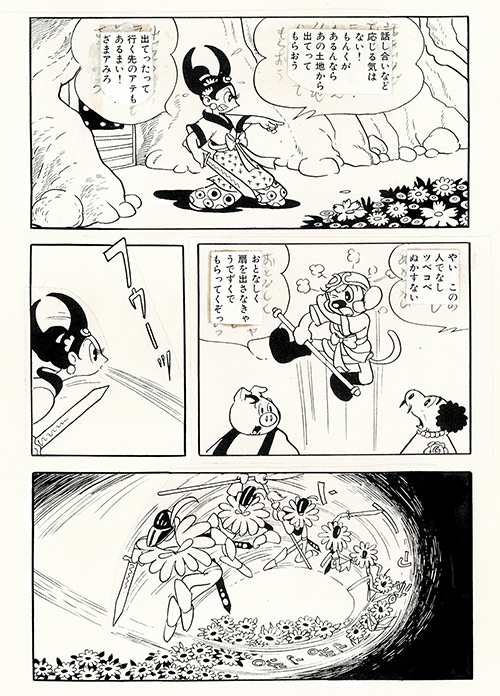 The fight at Mt. Kaenzan (exerpt from the manuscript)

(excerpt from the afterword on My Son Goku, Vol. 8 of Tezuka Osamu Manga Compilation published by Kodansha)

(omitted)
I started the serialization of My Son Goku on a request from Akita Publishing for gag manga. One reason I picked up Journey to the West as the original story was that I was impressed by a picture story version of Journey to the West authored by Mr. Miyao Shigeo and published from Kodansha. The book fulfilled a large part of my desire for manga during war time when we had very few comic books. But the biggest reason was I was greatly inspired by Tessen Koshu, the first Chinese feature length animation released in 1942. It was an eye-opening animation, which made me think of creating My Son Goku.

Actually, I do have a reproduced film of the work at hand. It's worn out now. Considering the fact that the film was made soon after Disney's Snow White, it's just astonishing that the feature length animation with the technology of special effects and multi film was produced in China then. In my memory Mr. Tokugawa Musei and Mr. Kishii Akira were in Japanese dubbed version. Anyway, I was amazed at how interesting and spectacular the animation was.

That being so, you will notice the influence of Tessen Koshu a lot in my work. Especially, the episode of Mt. Kaenzan and King Gyuma may seem like an imitation of Tessen Koshu because I could not get rid of the image no matter how I tried to erase it. On reading the episode by myself now, I feel very ashamed.

Besides, I freely utilized my creativity on the work full of gags, which, I believe, somehow inspired young manga artists or led them to imitate the style. (omitted)

「The fight at Mt. Kaenzan (exerpt from the manuscript) 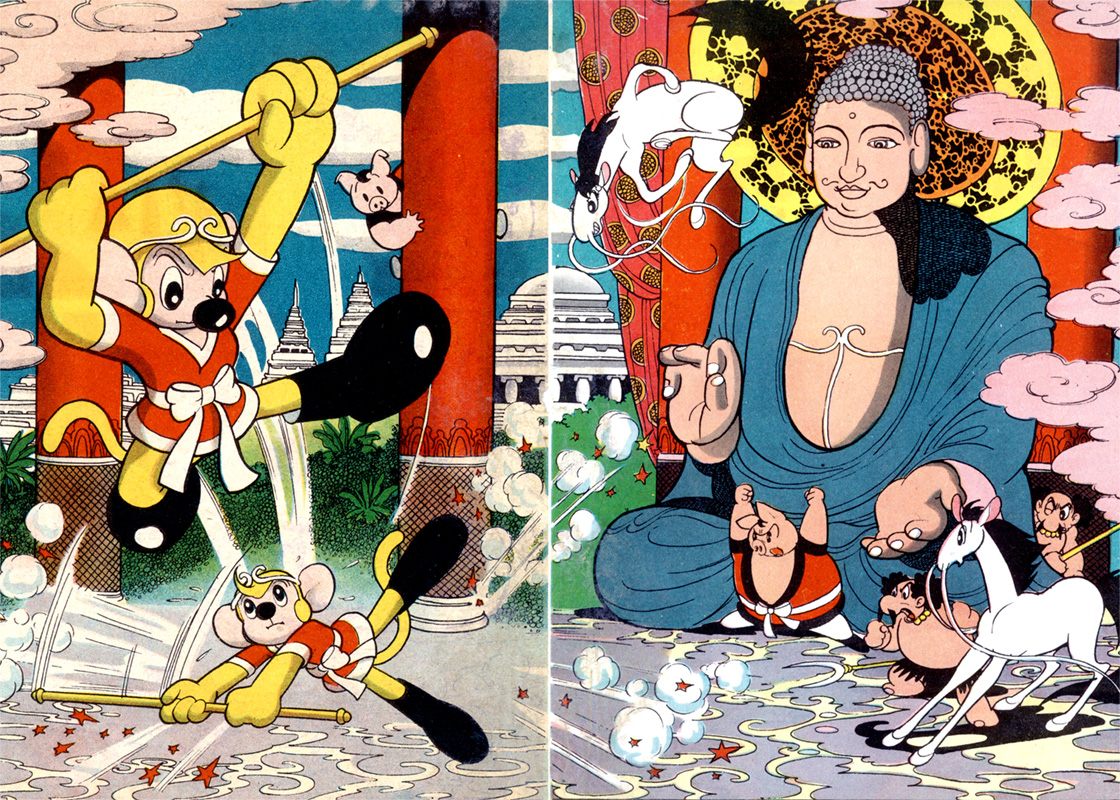