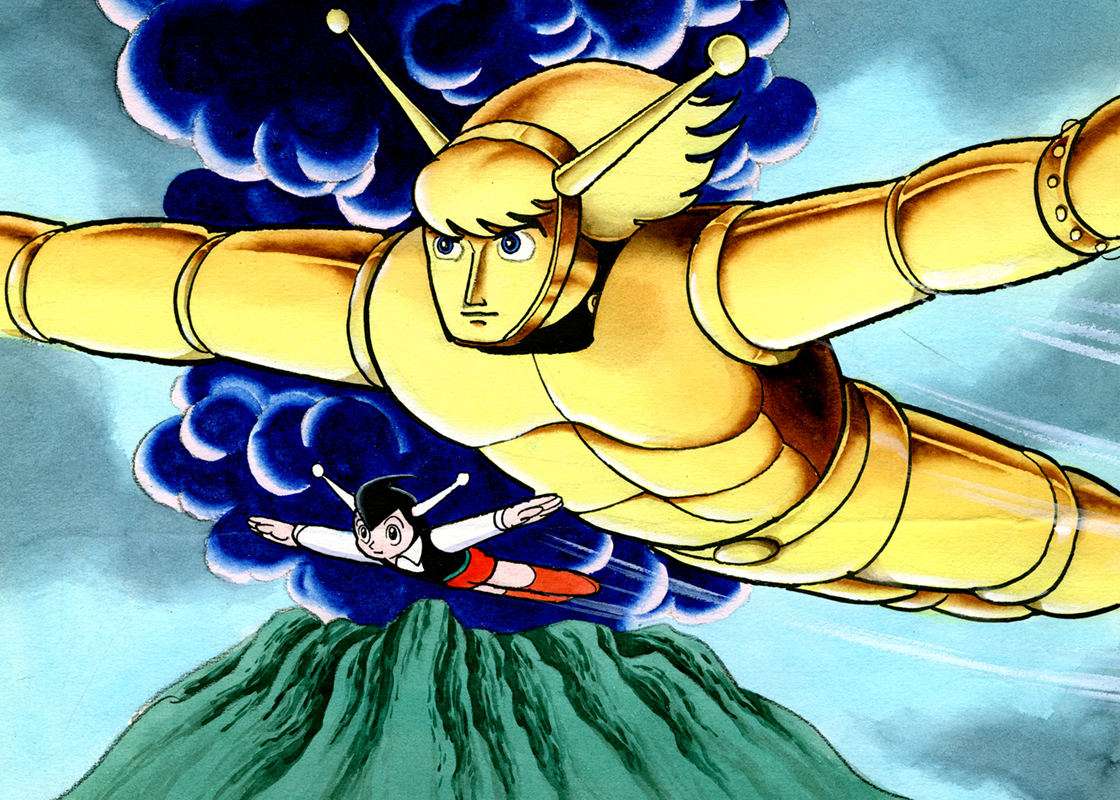 This is a Sci-fi manga featuring the battle between Ambassador Magma, a rocket man created by the creator of the Earth, and Goa, an alien who plans to invade the Earth. 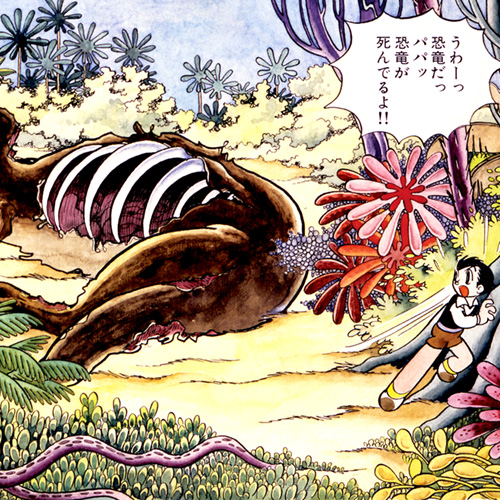 Murakami Atsushi is a reporter for a newspaper company. On waking up one morning, he and his family find they are in the world 200 million years ago, where dinosaurs are walking around outside the house. Actually, an alien by the name of Goa has made them slip back in time to show his power. Goa declares that he will take over the Earth and orders Murakami to report the declaration on the newspaper. Then, Mamoru, the son of Murakami comes back to the present. He is taken to the deep under a volcanic island by a giant man called Magma and meets the creator of the Earth there. The creator, calling himself Earth, tells he made three rocket men: Magma, Mol and Gum, to shatter Goa's ambition. Earth gives Mamoru a whistle with which he can call those rocket men whenever he is in trouble, and Mamoru comes to fight against Goa together with them. On the other hand, Goa has already started his evil plan to take over the Earth by sending out mysterious creatures which can change the appearance exactly like humans to the Earth. 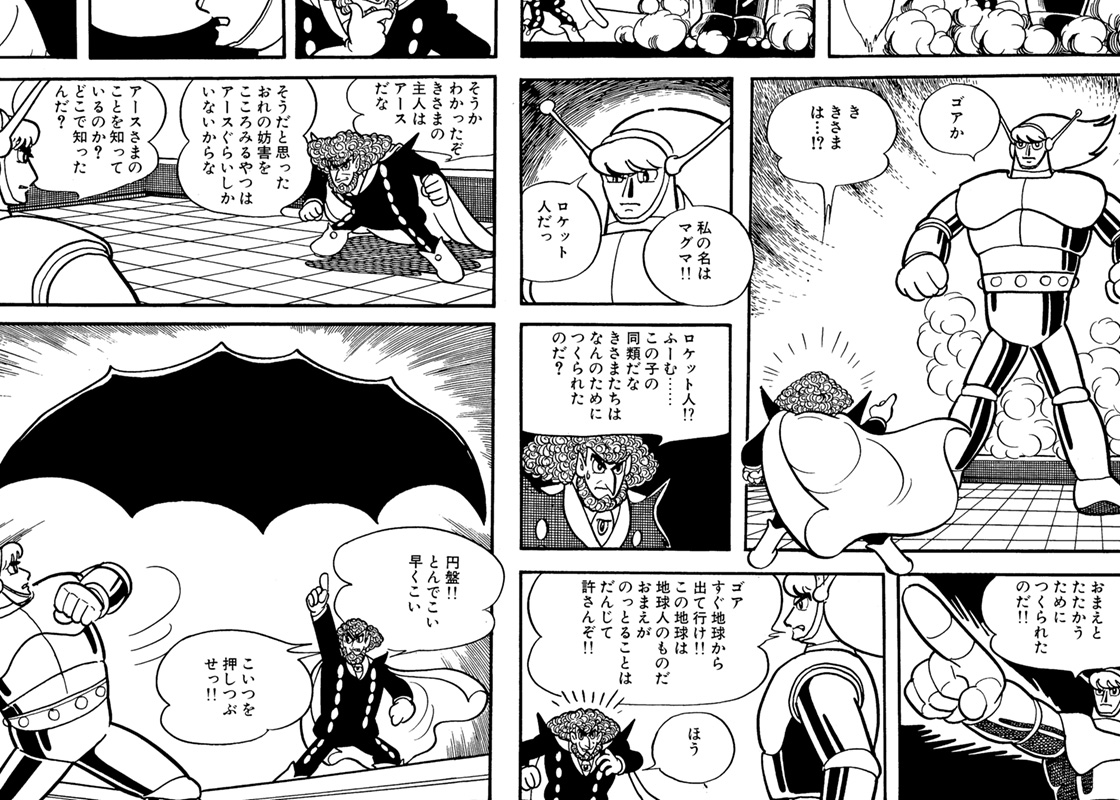 The story about an alien invading the Earth may be kind a classic in the realm of Sci-Fi. It, however, is a universal theme depicted repeatedly with different machineries beyond times. In this work, Goa tries to obtain the Earth by using every trick to achieve his goal. But his approach seems amicable on the surface. He looks like a real-estate agent in an elegant suit with long wavy hair. Seemingly he looks like a mafia member, not an evil alien. Besides, the rightfulness of Earth and Magma who fight for the purpose of saving the Earth is questioned in the story. In the episode, "Futari no Yukie (The Two Yukie)", a human girl and an alien disguising itself as a human girl live together as if they are sisters, and most readers feel sympathy for the alien, not for the human girl. 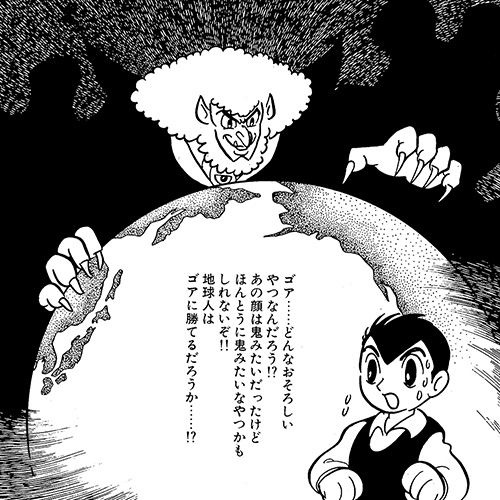 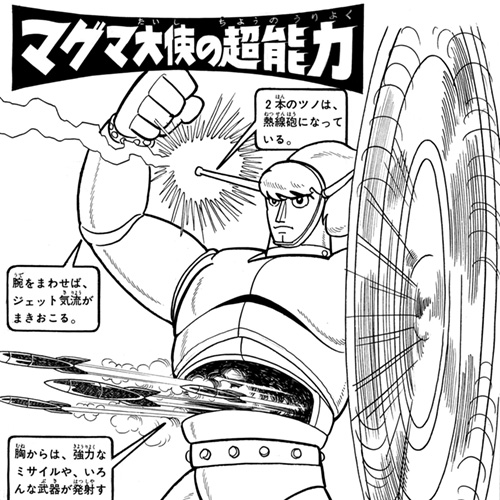 This work was created when Tezuka was engaged in the largest number of serializations simultaneously. Since he was so busy that Inoue Satoshi and Fukumoto Kazuyoshi helped him drawing the cartoon for the work. In terms of the episode, Cyclops, contained in the latter part of the series, Tezuka hardly drew the cartoon by himself. Accordingly, the episode was not turned into a comic book later. In 1966, Ambassador Magma was turned into a live-action TV drama with special effects by P Production. In tune with Monster boom in Japan, several monsters not in the original manga were also added to the TV drama. The TV drama, which was well finished, gained popularity along with the manga serialization. 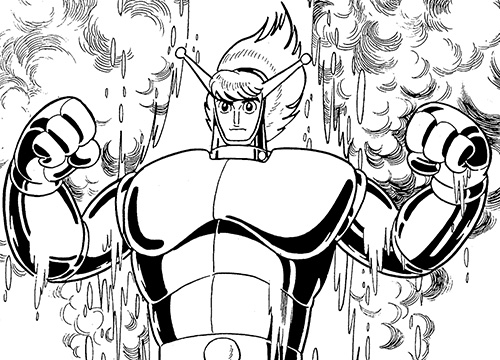 Magma is a rocket man made by Earth. He appears in front of Mamoru who happened to take the picture of Goa. Magma can transform himself into a rocket to fly freely, shoots heat weave from horn-like parts on his head (which actually are his listening devices), and create jet stream by swinging his arms. He is also equipped with arms stored in his chest compartment. To save the Earth, he fights against Goa together with Mamoru. He appears in front of Mamoru when Mamoru blows a whistle three times.
>Character/Magma 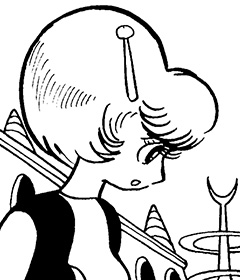 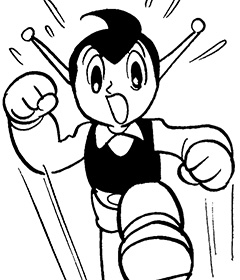 Mol is a rocket woman with an appearance of a beautiful woman and Magma's wife. She can transform herself into a rocket as well as shoot heat wave from her ears as Magma does. She appears in front of Mamoru when Mamoru blows a whistle twice.

Gum is also a rocket man and the son of Magma and Mol made by Earth at the wish of Magma. He is modeled after Mamoru. He appears in front of Mamoru when Mamoru blows a whistle once. 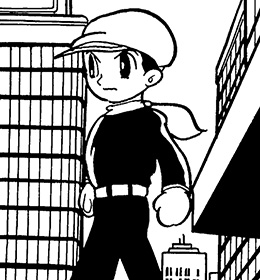 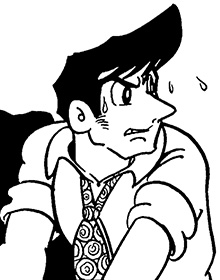 Mamoru is the only son of Murakami Atsushi. Involved in the ploy by an alien calling himself as Goa, he slips back in time to Jurassic period together with his family. Later he receives a whistle with which he can call three rocket men, Magma, Mol and Gam, from Earth.

Atsushi is a reporter for Maikai newspaper. He tries to cover the story of Goa's conspiracy to conquer the Earth, but his plan is obstructed by Goa. His parents live in Nagano. 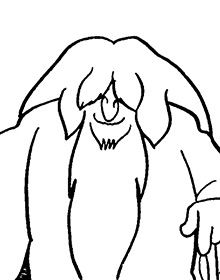 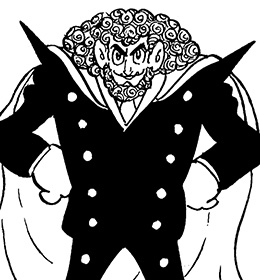 He is the creator of the Earth. He has the appearance of an old man with long hair and beard. He tries to save the Earth from Goa by creating Magma.

He is an alien who enjoys obtaining stars and planets in the universe from the creators as his hobby. Now his target is the Earth. He has the appearance of a gentleman, but originally looks like a lizard. 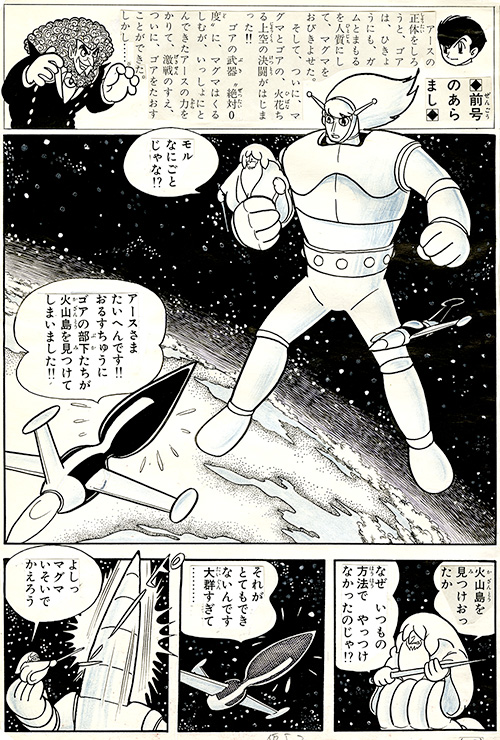 Exerpt from the manuscripts

(excerpt from the afterword on Ambassador Magma, Vol. 3 of Tezuka Osamu Manga Compilation published by Kodansha)

I started the serialization of Ambassador Magma, receiving an offer from Shonen Gaho just when TV series of Astro Boy took off. The publisher wanted me to make a piece of complete entertainment.
W3, Big X, Rop-kun, Princess Knight and more. I was full of energy then. I could keep writing long stories while dealing with chores related to Mushi Production. But I finally found myself overloaded when I was engaged in Ambassador Magma. So, I had to ask Mr. Inoue Satoshi and Mr. Fukumoto Kazuyoshi to help me in drawing. At the end, the most part of the work was drawn by them. Therefore, I decided not to contain the episodes released after Black Garon in this compilation because they were technically not mine.
(omitted)

Exerpt from the manuscripts 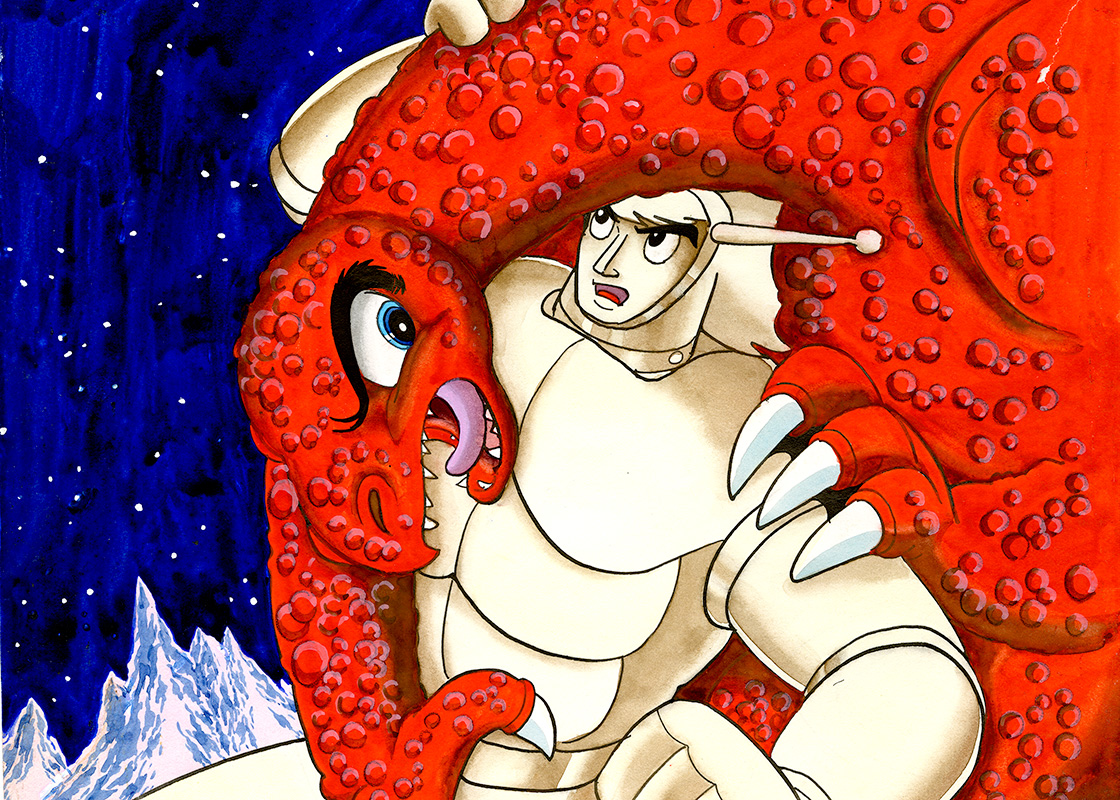