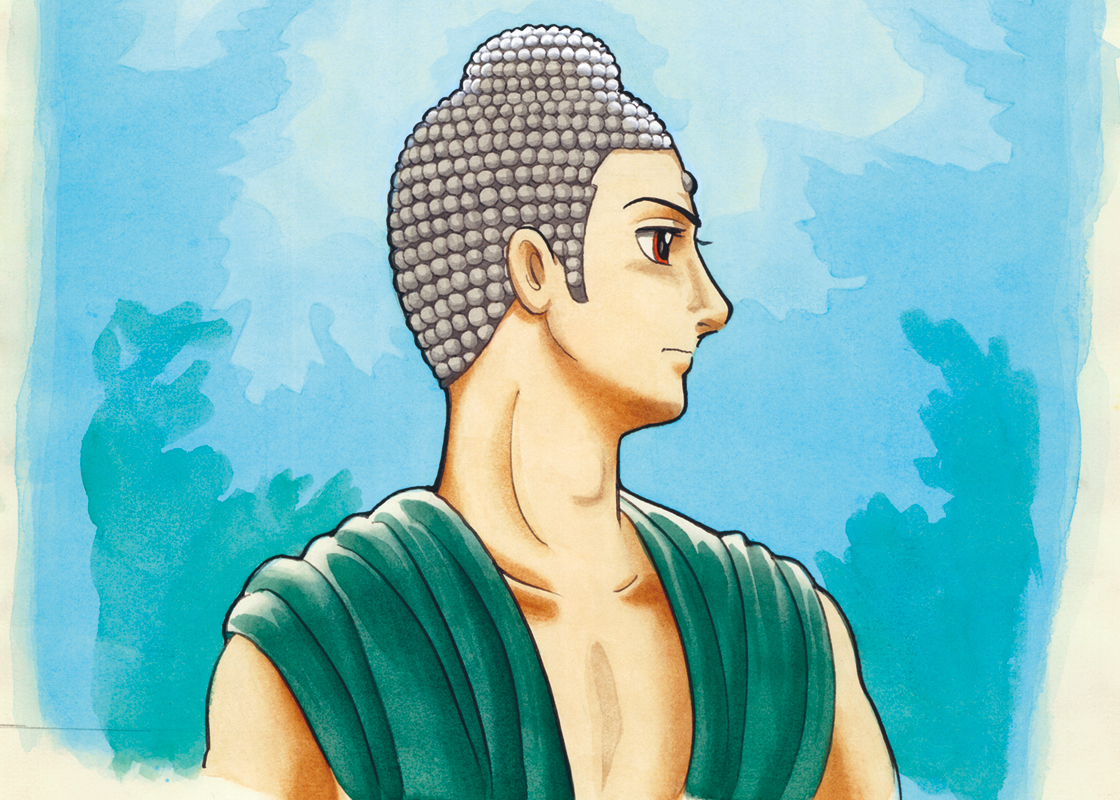 This is a story of Buddha by Tezuka Osamu based on his own interpretation. 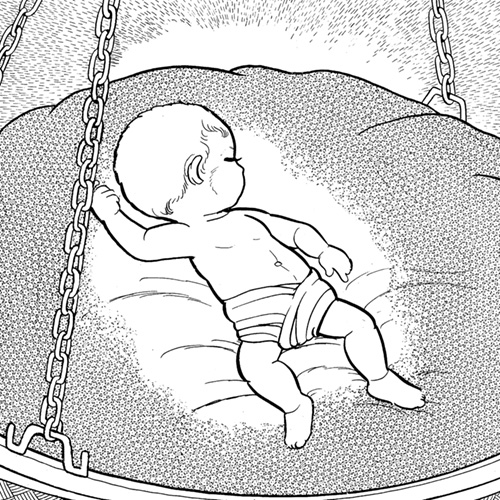 Siddhartha is born as the eldest son of the King Suddhodana of Shakya of Kapilavastu, the country located at the foot of the Himalayas. But he is raised by his aunt Pajapati since his mother died on his 7th day of life. He gets married to Yashodara at the age of sixteen and becomes a father. The son is named Rahula. But Siddhartha comes to think of a life-and-death issue, the very underlying theme of life. At the age of 29, he becomes a priest, leaving everything behind him. Later he achieves enlightenment under the lime tree. After then he identifies himself as Buddha, traveling around in India to preach people. 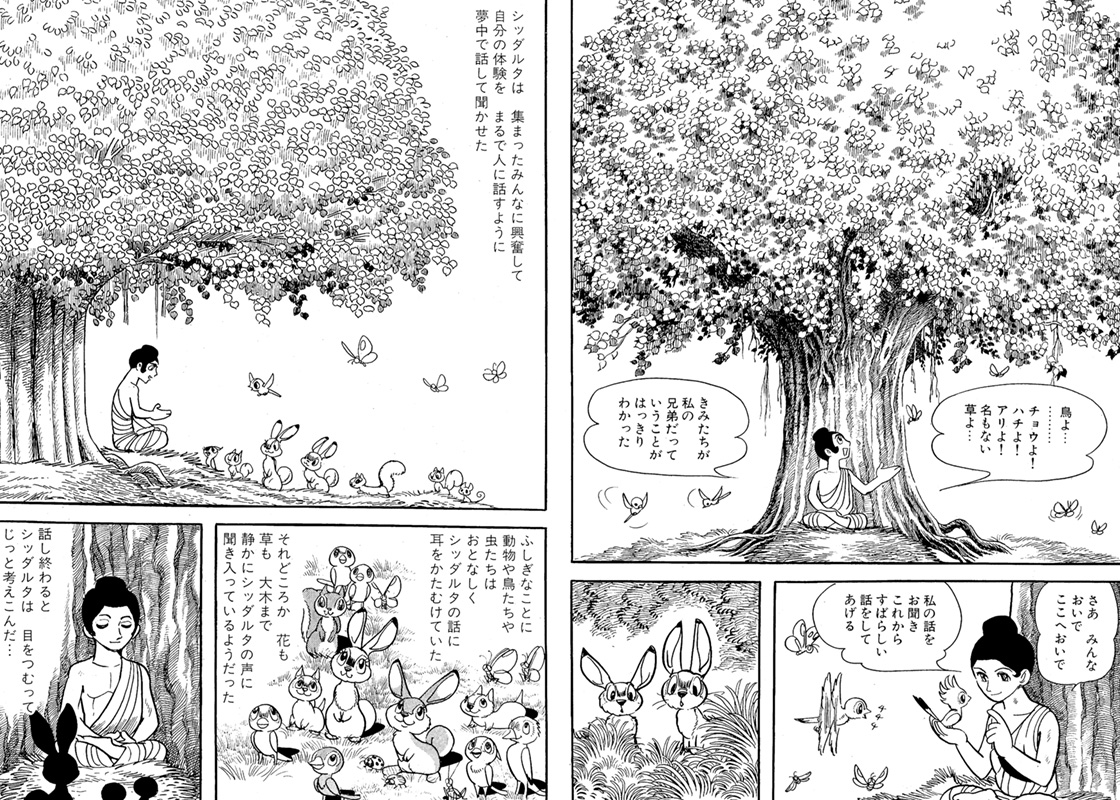 Tezuka Osamu took a philosophical view about life and universe, and a part of such his view was reflected in some of his works, especially in Phoenix. In the chapter of Hoo he treated the theme of reincarnation, and in the chapters of Space and Strange Being, he treated the theme of karma. Also, those stories seem to bear Buddhist connotation as they are based on Japanese history. Upon the serialization of Buddha, Tezuka closely studied Buddha's biography and adapted the oriental philosophies to the great saga with actions, adventures and climaxes so that even youngsters could easily understand and enjoy it. According to Mr. Takeo Osamu, the former editor of Kibono tomo who was in charge of Tezuka's works, he requested Tezuka to depict social backgrounds based on a caste system and class discrimination in ancient India in the prologue. And such his request was fully realized in the tragedy of Chapra and Tatta developed in the 1st part of the work. 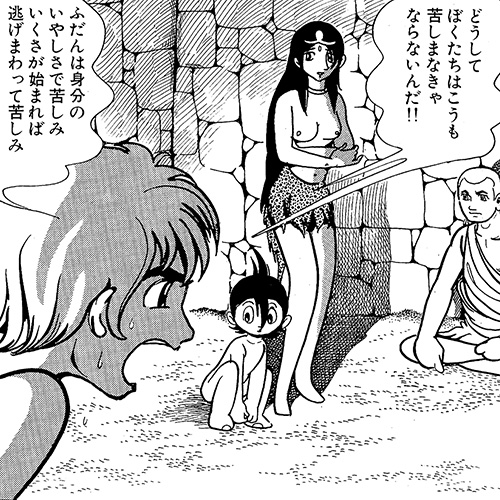 Chapra complaining his suffereing as Sudra(slave) 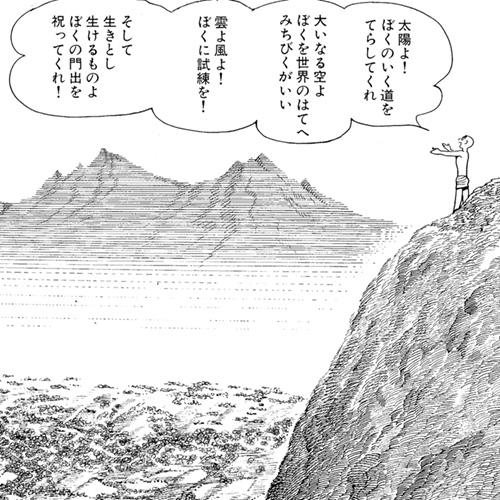 As same as Phoenix, Buddha is a great saga about human's life and death. Just after COM, the monthly magazine on which Phoenix was serialized, was suspended, Tezuka received an offer from the editor of another magazine, Kibono tomo. But Kibono tomo was a boy's magazine targeted for younger readers, therefore, Tezuka gave up the serialization of Phoenix on it. Instead, he prepared a new work, Buddha. Though the magazine changed its name from Kibono tomo to Shonen World to Comic Tom along with rebuilding its image, Buddha was serialized continuously on it. Most of the characters around Siddhartha are fictional characters. Even the real characters, Tezuka embroidered them boldly to give dramatic impact on the work. 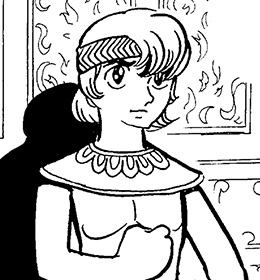 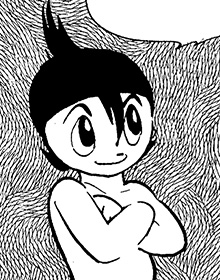 He belongs to Shudra. While working as a slave carrying loads, he is attacked by a group of Pariah and encounters Tatta. One day Chapra saves the General of Kosala attacked by an alligator and gets an opportunity to move up in life. However, being known that he is from Shudra, he is killed by a Kosala solider.

He belongs to Pariah, the lowest caste being oppressed more than Sudra. He makes a living as a thief by stealing from caravans. Then, he becomes an orphan after his family is killed by a Kosala solider. When he is very young, he has a unique ability to get into any animal's mind and manipulate it. After grown up, he becomes a solider of Magada, the enemy state of Kosala, out of hatred to Kosala. 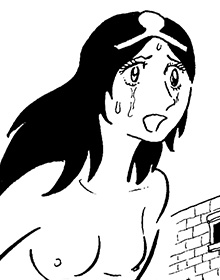 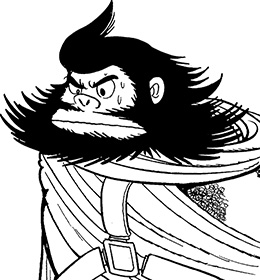 She is a gentle natured woman who belongs to Sudra. She warmly watches over her son, Chapra. She is also like a mother for Chapra's close friend, Tatta. She is killed by a Kosala's solider together with Chapra.

He is a general of Kosala. He is saved by Chapra when attacked by an alligator. Then he adapts Chapra as his son without knowing his true caste.
>Character/Saruta 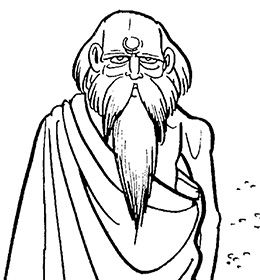 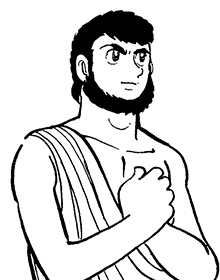 He is a hermit who predicted the birth of Buddha and is followed by a lot of disciples. He believes a man who can solve the enigma of a rabbit which sacrifices itself to save a disciplinant has mysterious power and becomes the king of the world. He, then, orders Naradatta to find the great man who will make an appearance to the south.

He is one of Asita's disciples. On the course of his trip to find the great man with mysterious power, he encounters Tatta who can freely get into any animal's mind. Then, he comes to travel with him, thinking Tatta would be the great man he is looking for. 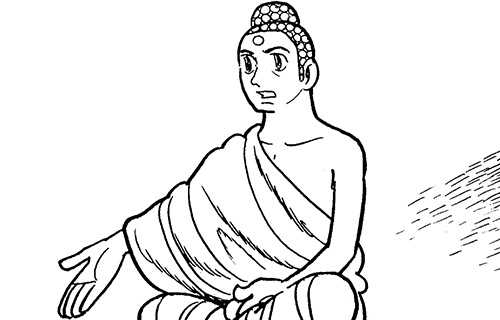 Siddhartha (Buddha) is the founder of Buddhism. He is born as the prince of Kapilavastu, but in poor health by nature. He is a quiet and smart boy who shows a remarkable talent. He thinks of the world after death or gives his mind to a small bird caught by an eagle in the field. Knowing the agony of death and sickness in the early stage of his life, he becomes a samanna to find a way to get free of such suffering. Later he finally becomes Buddha through his encounter with a lot of people, experiences and religious training, and comes to travel through India to teach people his faith.
>Character/Buddha 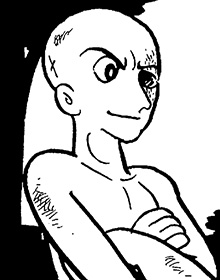 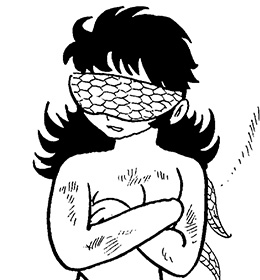 He is a young man who belongs to Ksatriya, but now in training to become a samanna (monk). He learns how to be as a samanna from Siddhartha, but he leaves Siddhartha due to the differences in a way of thinking during self-mortification. Later, he is saved by Siddhartha who has become Buddha. He conciliates with him and becomes his disciple.

She is from Sudra caste and the leader of a gang of thieves. She gets to know Siddhartha while he is leaving the castle encouraged by Tatta. Despite the difference, they fall in love with each other. Then, she has her eyes burned and is exiled to the field as a punishment. 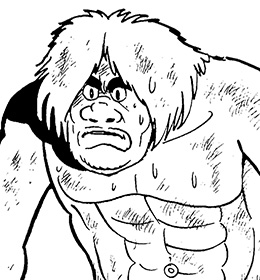 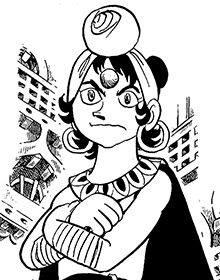 He is from Sudra caste, and later becomes a solder of Kosala. His parents are killed by being stumped by an elephant. Taking a medicine developed by his father who knows about herbs, he grows massively to become a giant.

He is the prince of Kosala. After learning his mother is actually Sudra from Kapilavastu, he ostracizes her to the slave quarters. He is intelligent and cold, and is willing to ignore his own emotions for his public stance. Later, he becomes the king of Kosala and invades Kapilavastu to destroy. 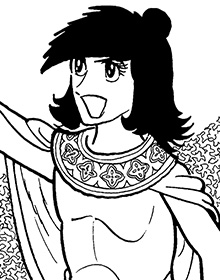 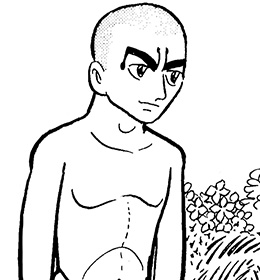 He is Bandaka's son and later becomes the king of Kapilavastu temporarily after Siddhartha leaves the kingdom. Raised by his mother alone after the death of Bandaka, he is often bullied by children of noble families. He pursues any means for himself. When he goes on a picnic with other children and is trapped in the cave attacked by an elephant running wild, he exhibits his brutality by killing others to get water all to himself. As a disciple of Naradatta, he learns wild laws and comes to believe that power controls everything.

He is Devadatta's younger half-brother, born as a son of Devadatta's mother and her new husband. When his parents were stranded in the small island, they ask Mara (devil) just to save Ananda. Since then, Ananda has come to be protected by Mara all the time. After grown up, Ananda becomes a thief and commits a murder. He meets Buddha while escaping from the arm of the law and cleans up his act to become Buddha's disciple. Buddha takes care of Ananda in one way or another and protects him from Mara's attempt even after he becomes his disciple. In Buddha's later years, Ananda serves him as the most reliable disciple and accompanies him on his last missionary trip. 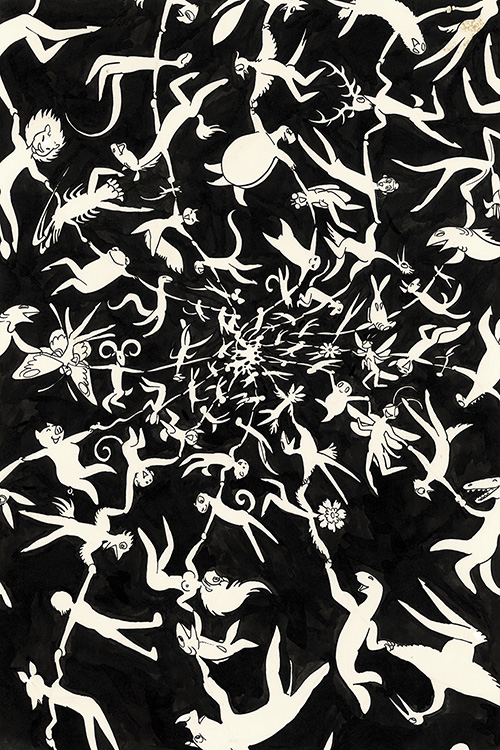 (excerpt from the afterword on Buddha, Vol. 14 of Tezuka Osamu Manga Compilation published by Kodansha)

(omitted)
As I mentioned before, most elements of Buddha are fiction. It's not an accurate manga adaptation of Buddhism scriptures. So, people who expected the accuracy expressed anger over my work. But I think such adaptation true to the original should be done by someone else except me, which I believe is not interesting as a manga work. Also, it's said there are various different stories or vague elements in Buddha's biography.
Now I don't have space to point out all the fictional elements in detail. But Chapra, Tatta, Migela, Bandaka and Naradatta are all fictional characters I made up. They do not appear in any Buddhism scriptures. Also, Dhepa, General Budai, Assaji, Yatala, Visakha, and Sukanda the knight are my creations as well. In terms of true characters appearing in Buddhism scriptures including Ananda, Devadatta, Ajatasattu, King Prasenajit, Angulimala and five Bhikkhu, I totally changed them into my own characters.
If all those fictional characters or elements are removed from the work, you'll notice just a very few parts are left. That's why my Buddha is not Buddha's biography. I also changed the thought and doctrines in my own way, which also seems a problem (from the stand point of Buddhism). Accordingly, Buddha is an absolute fiction I made by borrowing Buddha's biography.
(omitted) 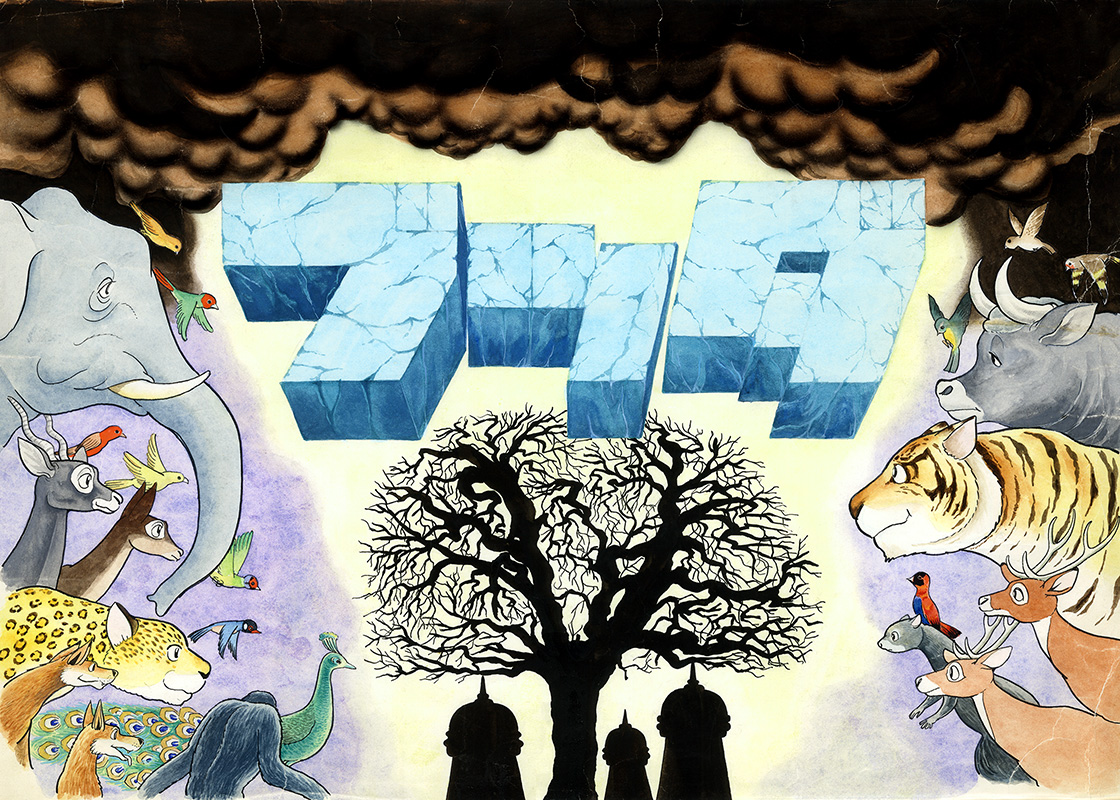