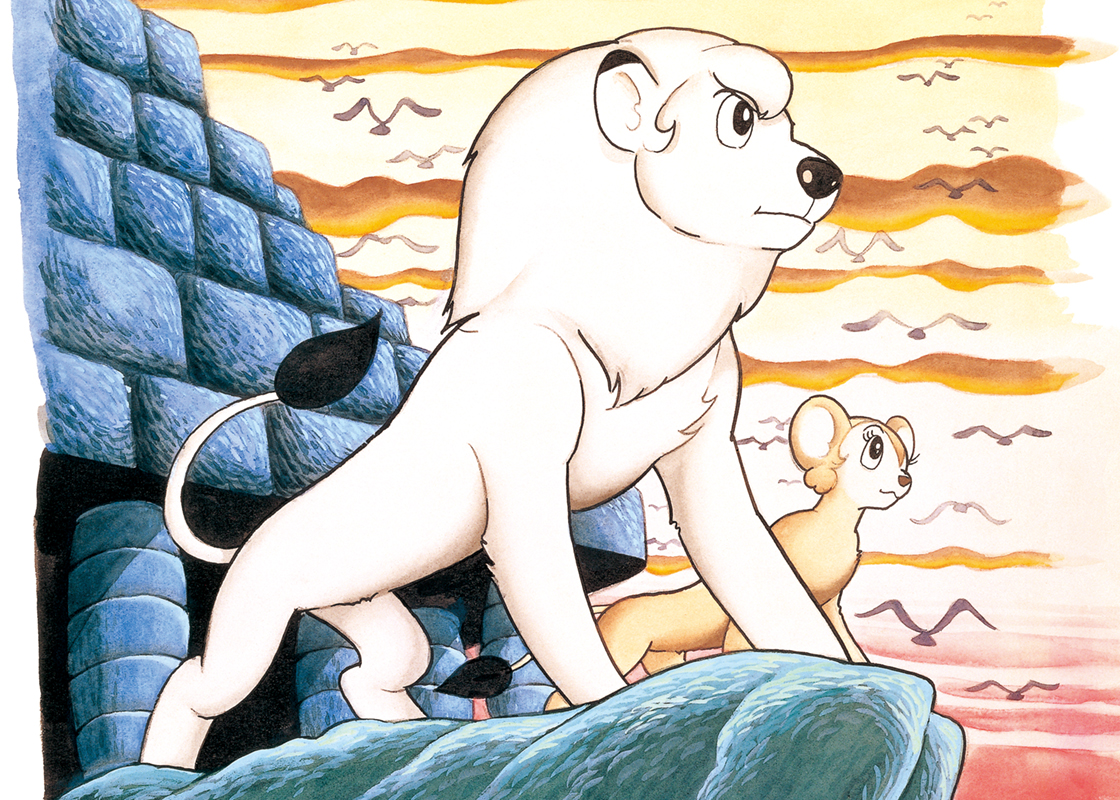 This is a full-length manga work about relationships between wild life and human beings depicted through the growth of a white lion raised by humans, Leo. 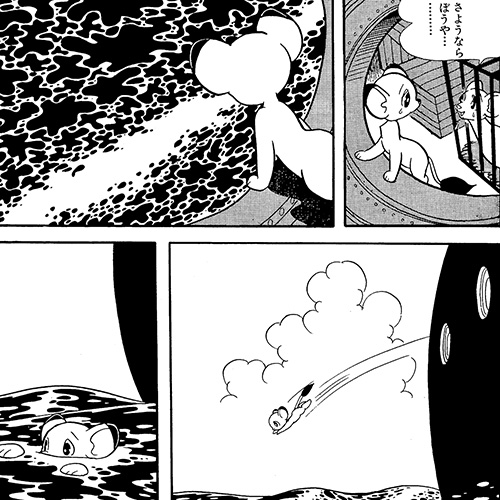 Right on the equator in Africa, there is a white lion by the name of Panja. He governs the jungle as the king of animals. One day he is shot by a hunter while his wife is captured alive to be sent to the zoo. On the ship heading to the zoo, she gives a birth to a boy and names him Leo, telling him "You must go back to Africa to become the emperor after your father." After letting him escape from the ship, she dies as the ship was sunk attacked by a storm. Leo arrives a port town in Arabian Peninsula, not in Africa, where he meets a boy by the name of Kenichi and is raised by him. A year later, Leo and Kenichi accompany an investigation team dispatched to Mt. Moon in Africa for the purpose of researching Moon Stone, a raw stone generating energy. Leo who sees the jungle for the first time shows disgust at wild animals killing each other. But he comes to regain his confidence and become the great emperor by establishing the Jungle Empire to protect weak animals.

This masterpiece has been turned into animation works several times, and Leo, the main character, has been popular among people, especially among children thanks to his cuteness. Tezuka also made its derivative work for kids titled Leo-chan. Literally Jungle Emperor is one of Tezuka's great masterpieces. Tezuka authored the initial edition during the period from 1950 till 1954, which was still the early stage of his career as a manga artist. Yet the series is enjoyable enough even today thanks to its universal theme. Leo breaks his back for peace and civilization of the jungle as well as tries to get to Mt. Moon which no man has ever reached. Indeed, Leo is the hero and the king with tremendous courage, great wisdom and tireless energy. The readers would find themselves attracted by Leo's large-scaled hero story full of turns and twits even after grown up. 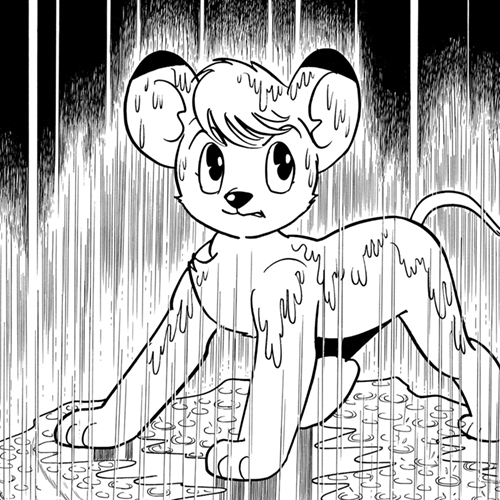 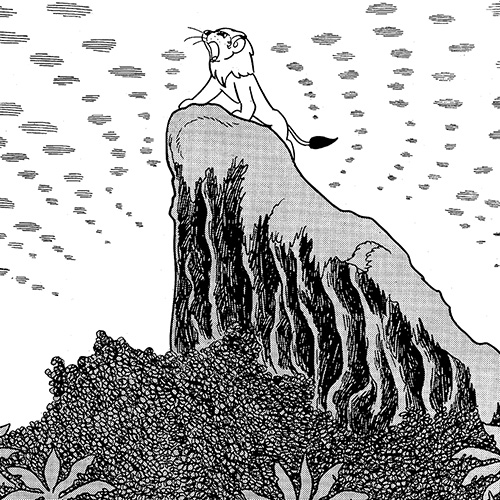 Jungle Emperor is one of the most famous Tezuka's full-length masterpieces ranked with Astro Boy. Tezuka, who mainly wrote manga for comic books published in Osaka then, shifted the center of his activities to publishers in Tokyo after the work. However, Gakudo-sha, the publisher of Manga Shonen which serialized the work issued only two volumes of the comic book edition, suspending the following publication for a long time. Later Shogakukan published all of the series in the form of comic books for the first time ever as Sunday Comic edition (1965-1968). Actually, Tezuka retouched some of the manuscripts for the edition. For that matter, Tezuka retouched them whenever the new comic book edition was planned. Accordingly, there are multiple editions of Jungle Emperor published so far. 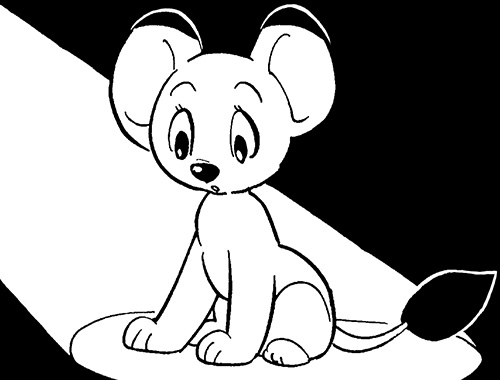 Leo is the only son of Panja, the white lion governing wild animals as the king in Africa. He is born on the ship to London which his mother, captured alive by hunters, is boarded. However, the ship is overthrown on the voyage, and Leo is drifted to a town called Aden where he is saved by Kenichi. He yearns for civilized life of humans as grown up with them. But he comes to be proud of being a lion after coming back to Africa and brings civilization to the jungle after becoming king. He teaches languages to animals as well as builds a palace as their oasis. 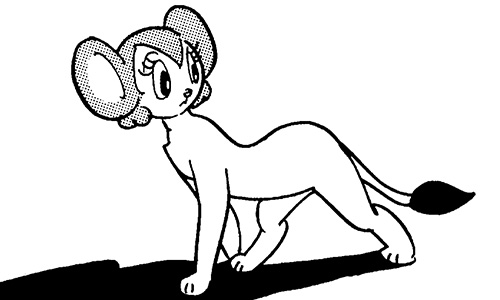 She is a female lion serving to a white lion by the name of Ryona, the guardian of the shrine which has been guarded only by white lions for generations. She meets Leo while being caught by Jungler Tribe, and Leo saves her. Later, she gets married to him and becomes a mother of two cubs. 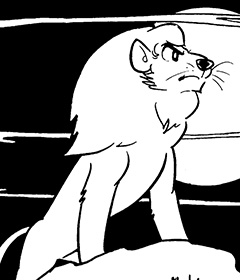 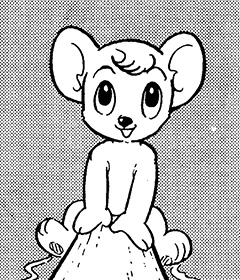 He is Leo's father. Thanks to his snowy white coat, local people are afraid of him as a magic lion while hunters try to hunt him. But very clever Panja is not trapped easily.

He is Leo and Riya's son. One day he leaves home, yearning for human life. But he is caught by an American showman by the name of Dandy Adam and becomes a circus star in New York. 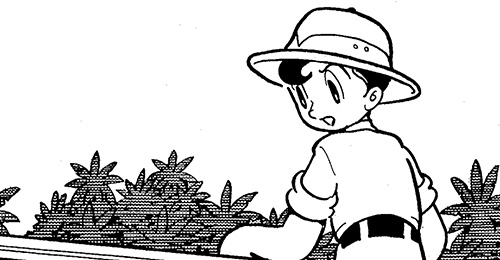 He is a Japanese boy living in Aden. He joins the expedition team to Africa. One day, Donga Tribe attacks the team due to their misunderstanding while the team is staying in Kupu Kupu village, and Kenichi gets separated from the team. Then he makes friends with African animals while spending some time together with Leo and them in their settlement.
>Character/Kenichi 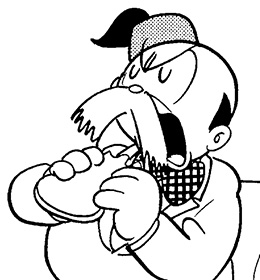 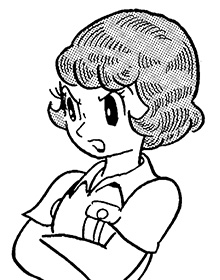 He is Kenichi's uncle living in Aden. First, he funds the expedition team to Africa instead of joining the team. On hearing Kenichi gets lost in the course of the expedition, he decides to go to Africa by himself after looking for the nephew for three years.
>Character/Higeoyaji

She is Ham Egg's daughter who joins the expedition team together with Kenichi. Upon attacked by Donga Tribe, she escapes with Leo and Kenichi. Then she spends some time together with them. Later she is caught by Jungler Tribe and becomes the queen of the tribe. 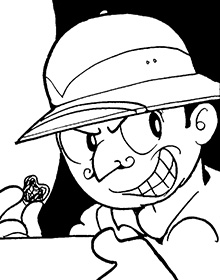 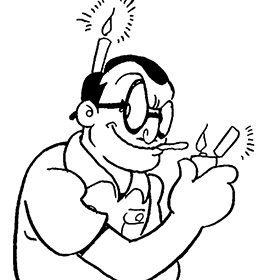 He is a hunter who deals with Donga Tribe to hunt Panja. After successfully hunting Panja, he obtains a jewel from the chief. Actually, the jewel is Moon Stone only unearthed at Mt. Moon known as the fantom mountain. As such, he comes to join the expedition team to Africa. He used to abuse Acetylene Lamp cruelly at the Nazi prison camp. He loves his daughter with extravagance.
>Character/Ham Egg

He suddenly appears in front of Ham Egg. He blackmails Ham Egg about being abused by him at a Nazi prison camp to obtain Moon Stone. 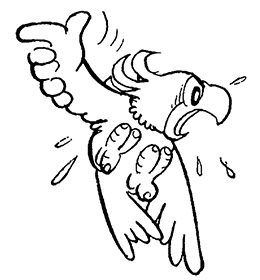 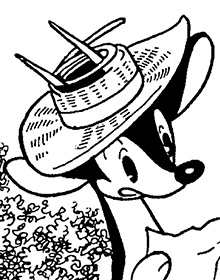 He is a parrot and Leo's good friend. He speaks human languages a little and admits himself knowledgeable. But he is a bit of a scatterbrain, also too nice.

He is a young deer born while Panja governs the jungle. He asks Leo to come back to the jungle and become the king of animals. His trademark is a straw hat which Leo gave him as a present. He is a good partner of Coco and an idea person who proposes interesting things such as building a cafeteria and palace. 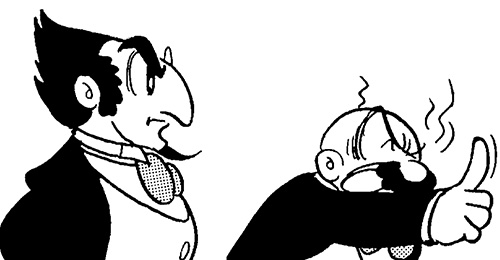 He is a professor of Ampolocha University studying Moon Stone found in the upper course of Amazon in South Africa and at Mt. Moon in Africa. He organizes an expedition team to Africa for the purpose of geological survey.
>Character/Duke Red

He belongs to Entecorse Museum. As the researcher of Moon Stone found only in the upper course of Amazon in South America and at Mt. Moon in Africa, he leads the expedition team together with Professor Plus.
>Character/Notaarin 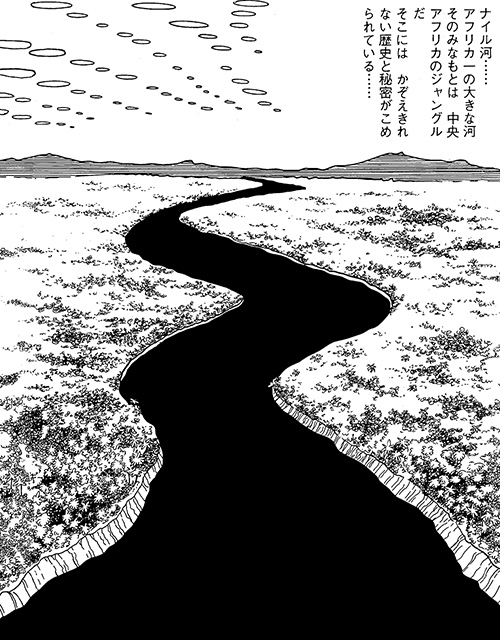 
I don't need to talk about Jungle Emperor as the work has been covered by a lot of articles so far. But there is one thing I have to apologize.
That is, I have lost more than half of the original manuscripts, meaning the first part of the work in this compilation was what I rewrote recently. When we decided to start Jungle Emperor at Mushi Production, one of my staff took out some of the comic books stored in my library to practice drawing. Another staff took out even the original manuscripts to his home. I didn't feel at ease as he didn't bring them back soon. One night, he got mortally drunk, found dead in his room. I got totally upset at the news, and asked to check his room. But it was too late. His room was already cleaned up. Accordingly, the manuscripts I lent him were lost.
I cried out for the fact my manuscripts were lost since they were as important as my child. (omitted)
So far Jungle Emperor has been published six times, and I changed the story upon every publication. I don't tell which one is the best anymore. In terms of TV series, it consisted of one-off episodes. I made up quite different stories for the series, too. (omitted) 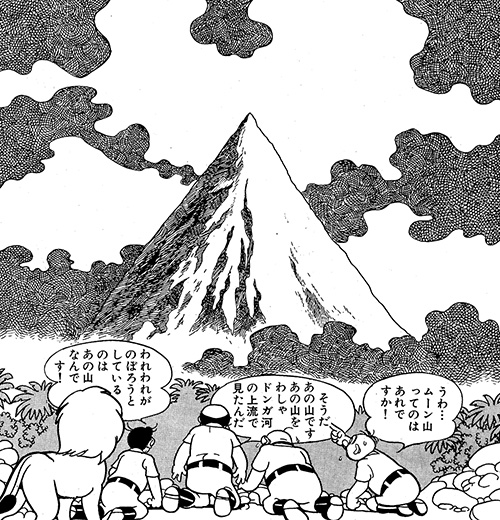 I started the serialization of Jungle Emperor on 1948. Before that, I had completed my Sci-Fi trilogy: Metropolis, Lost World and Next World, and considered writing a trilogy featuring animals, which were Threatening Virus, Fish Man and Jungle Emperor. But I could only start writing Jungle Emperor to be published in the form of a comic book. (Later I used the part of Threatening Virus in Dr. Tiger's adventure and serialized Fish Man under the title of Pipi-chan on Omoshiro Book.)
As a preparation for the work, I continuously visited the library for a year to study about Africa, animals and a mysterious mountain called Mt. Moon. Especially Mt. Moon which British adventurer by the name of Stanly discovered had been the focus of a lot of adventurers for a long time. I was attracted by the mountain very much, and decided to write about animals trying to challenge nature and nature standing in their way without end through a drama of an expedition party and a lion helping them. (omitted) 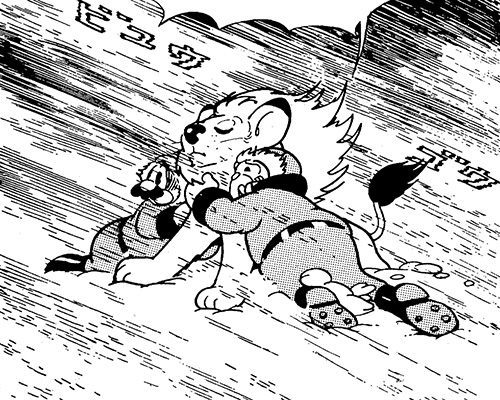 (omitted) Jungle Emperor is the work that has experienced several misfortunes thanks to its long and vast story. Most publishers suspended the publication of the comic books in the middle, not able to continue it till the end. Accordingly, there are not many people who actually know how the story ends.
I wanted to write a kind of a life story of Panja, Leo and Rune, the three-generation family of white lions - the history of wild life with continuous battles and conquests. As the old phrase, "The nation is ruined, but mountains and revers remain", almost all characters who have challenged Mt. Moon die at the mountain. That's the climax of the drama. But what I wanted to depict was a hope for future, not a tragic fate. I wanted to express my respect for life challenging nature continuously even destroyed or vanished by it. (omitted) 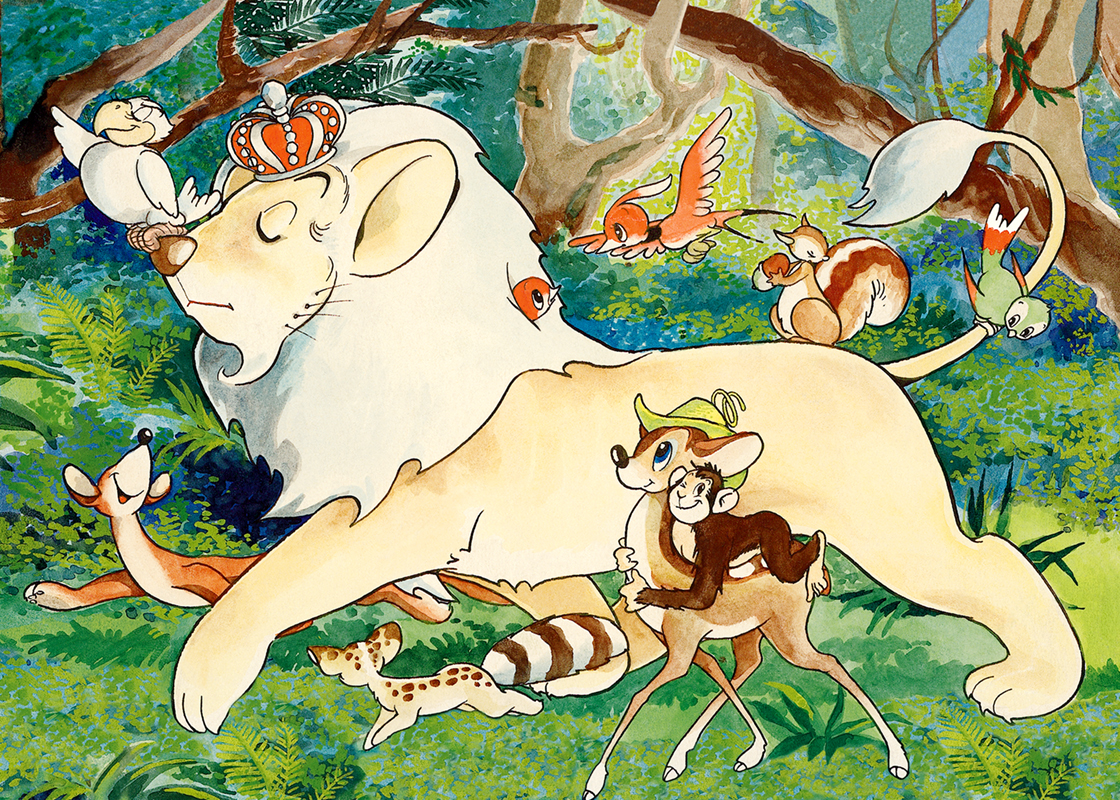