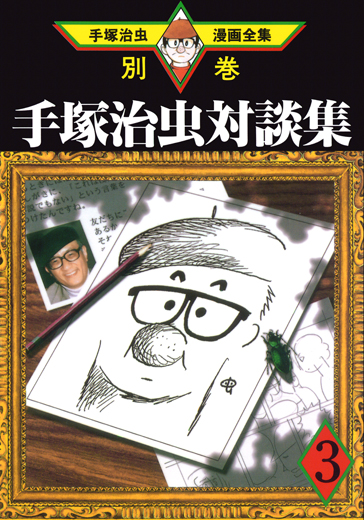 "The mad world of Manga artists," with Matsumoto Reiji and Hagio Moto

The three Manga writers here share an open exchange of thoughts about the realities of their profession, including everything from assistants and cook helpers to the ideal woman figure to thoughts on love as a writer of Manga for girls. And there are sure to be a great number of young writers who might get a bit of a shock reading the section on how one's pen name affects one's career as a Manga artist.

"On American comics," with Ono Kosei

In this conversation, Manga critic Ono Kosei inquires of Tezuka Osamu of the influence American comics have had on his Manga. Starring with the relationship between his regularly appearing character "Police Inspector Geta" and Dick Tracey, Tezuka Osamu speaks of the secrets behind the creation of his Manga characters, mentioning various instances where he was inspired by American comics. He also talks extensively about Marvel Comics, which is the kind of content hard to find anywhere else.

"Our critics are a thing of beauty," with Aku Yu

Two professional creative personalities, one of the genre of Japanese popular song, and the other a creator of Manga, talk about the process of creating, of expressing, and also touch on exactly what it is they are seeking and aiming for in their profession. This work is in essence a guide meant to convey "the correct frame of mind for living and working as a professional"-written by the two top professionals Tezuka Osamu and Aku-aimed at newcomers to the field as well as would-be professionals. The two writers describe how being under the constant scrutiny of the children-who represent the next generation of creative energy-weighs heavily on their minds, and the two agree that the capacity to work within the framework of such responsibility is, indeed, exactly what it means to be a "true professional."

"The dream of Astro Boy: predicting his emergence," with Aida Shuhei

Here, Aida Shuhei, professor of electronic information at Dentsu University, discusses with Tezuka Osamu his view that a robot like Astro Boy will become a reality in the future. The conversation also covers new forms of media and the coexistence of ecology and science. The two agree that, in the end, development of any kind of technology is impossible in the absence of human warmth.

"The majors and minors," with Morohoshi Daijiro and Hoshino Nobuyuki

Despite the title, the topic here has nothing to do with baseball. "Major" and "minor" are simply two convenient categories: "major" Manga writers being those whose works are aimed at the general public, and "minor" artists referring to those whose works are designed more for specific groups of people. Here, Tezuka Osamu speaks about the works of Morohoshi Daijiro and Hoshino Nobuyuki, who are both considered more of a more "minor," narrower genre, and also poses to them a multitude of questions-as if trying to absorb their youthful, innovative energy. At the same time, we get the sense in reading this work that Tezuka Osamu also lends his power to the young writers, showing them the limitless vitality characteristic of "major" artists in the way that he, imbued with boundless curiosity, draws out information from Morohoshi and Hoshino and makes it his own.

"The mood of the times," with Chikushi Tetsuya

In this interview, the journalist starts to theorize on the themes of Tezuka Osamu's Manga, inquiring as to "why Leo is white," but the response given by Tezuka Osamu (here he refutes the "outsider" theory on Leo and Astro Boy) is that there is "no particular meaning behind the color-it was simply a way of making him stand out as the main character." It appears, however, that it was not the case that there was "no particular meaning" (behind the color) but rather that Tezuka Osamu was evading the journalist's attempts to steer the conversation toward the subject of the perceived "humanism of Tezuka Osamu's Manga." According to the author himself, Tezuka Osamu's Manga were not meant to be a declaration of humanist principles. Instead, his work was concerned not just with "human" life, but for all living beings: indeed, Tezuka Osamu was concerned with the entire cosmos.

"Bringing a challenge to the world of modern Manga," with Ishinomori Shotaro

This interview consists of Ishinomori, a junior colleague of Tezuka Osamu's in the genre of Manga and author of "Cyborg 009," asking questions of Tezuka Osamu on the past and future of the genre. Tezuka Osamu places emphasis on the present and future of the art rather than the past, and also expresses disapproval with younger Manga artists, who tend to be satisfied with their works as long as they encounter acceptance in the present. Tezuka Osamu tries to convey the idea that works should be created to "stand the test of time," i.e. 50 years into the future. Since all phenomena are subject to change, it is perfectly natural that the trends supporting today's flourishing age of Manga will also eventually change. It may also happen in the future that Manga will again cease to be published, and, according to Tezuka Osamu, this would be just the opportunity for a rejuvenation of Manga culture. It is clear that Tezuka Osamu believed that the art of Manga was as immortal as his "Phoenix," or perhaps it was his special wish that it be so.