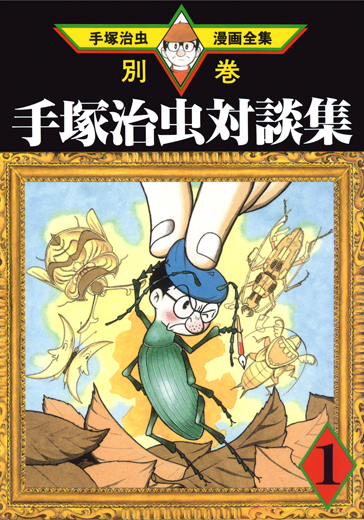 "The Universe Laughs," with Komatsu Sakyo

We would expect that a conversation on the Apollo moon landing between Komatsu Sakyo, a leading figure in the world of Japanese science fiction, and Tezuka Osamu, a pioneer in science fiction Manga, would have an epic quality-covering dreams of science and space exploration...but this exchange proves that that assumption could not be further from the truth! Instead, this is a tongue-in-cheek conversation in which the two go back and forth with the kind of folksy ridiculousness one would expect to hear in a bar. Some samples of their banter: "Let's send a kite to Mars to take NASA by surprise;" "how about eating miso soup on the rocket?," "Let's build a sauna on Venus and invite some geishas," and the like. This is pure lighthearted fun.

Novelist Kita Morio, who was an ardent Manga fan and also a self-acknowledged manic depressive, was also known for his hobby of insect collecting. These two men of similar interests enjoy a friendly, relaxed chat. The topic of conversation progresses from insects, and especially the role of the female insect in the insect world, to the human female. The two nod in hearty agreement as they conclude that "women are a different species."

In this conversation, Tezuka Osamu takes a modest stance in speaking with Tagawa Suiho, who had been a presence in the genre of Manga far longer than Tezuka Osamu. Of particular interest here is the revelation that Tagawa had written, prior to his famous work "Norakuro," a Manga featuring a robot as the central character. It comes across clearly in this exchange how Tezuka Osamu views Tagawa with great appreciation, as he humbly refers to his "Astro Boy" as "faddish material" compared to Tagawa's "Norakuro" (a Manga extremely popular with the people of Japan).

"The awakening of the consciousness of the universe," with Yokoo Tadanori,

"Manga are meant to convey a rebellious message," with Judy Ongg

Here, singer Judy Ongg comments to the effect that while Tezuka Osamu's Manga were characterized by humanistic elements, other Manga of the time were full of "shocking" things. Tezuka Osamu responds to this, however, by saying that his Manga "do not depict anything humanistic at all," adding that in fact all Manga are, on the contrary, of an "anti-establishment" quality. Tezuka Osamu's early Manga were the antithesis of the circumstances surrounding the art of Manga of the time, and he was the subject of a great deal of criticism for drawing the first "kiss scene" to appear in Manga. Tezuka Osamu makes it clear here that he always considered himself an "outsider," and that he does not view his Manga as "overflowing with a humanistic quality;" indeed, the reader can derive from this interview that he took pride in the fact that he was consistently attacking the hard realities of the times through his works.

"What we should hope for from comics today," with Ozaki Hideki

Here, Tezuka Osamu and Ozaki discuss the conditions surrounding the genre of Manga of the time, which was characterized by the huge popularity of the Manga entitled "Gakideka," a vulgar but powerful work which represented an attempt to crush the morals of the period. Tezuka Osamu analyzed the popularity of "Gakideka" as an expression of the power of anger of the repressed common people, and this piece is also a powerful objection to what the two feel were trends leading toward a controlled society. Here, Tezuka Osamu also expresses great hope in the fact that Manga can be such a powerful force.

Isomura Hisanori, newscaster for NHK, speaks on the popularity of Astro Boy in the U.S., and how Manga capable of facilitating communication with the rest of the world should itself be considered a form of culture. Tezuka Osamu responds that he is indeed striving to create works that can be understood the world over, and expresses his view that Manga should be "a form of art that can enchant and entertain children of any country."

Featured here is an exchange between leaders in the world of Manga. The topic here is not Manga, however, but rather the science fiction movie. The three speak of their fascination with "Star Wars: The Empire Strikes Back," and of their view that Disney's "The Black Hole" was "a rather odd production." They also discuss "Watership Down," a favorite of Tezuka Osamu's, and the new Fantasia. It is interesting to see here how Tezuka Osamu, who in contrast to the other two had produced animated films from his original works, enthusiastically encourages the other two, who had been creating original works only, to produce more animated films. Encouraged by Tezuka Osamu's zeal, Matsumoto expresses agreement with Tezuka Osamu that he would also like to create animated films that he could "really put his heart and soul into," to which Tezuka Osamu presses him further with, "Well, what are you waiting for?"

Based on "Mushirareppanashi," published by Ushio Publishers in 1981.