The Collected Lectures of Tezuka Osamu 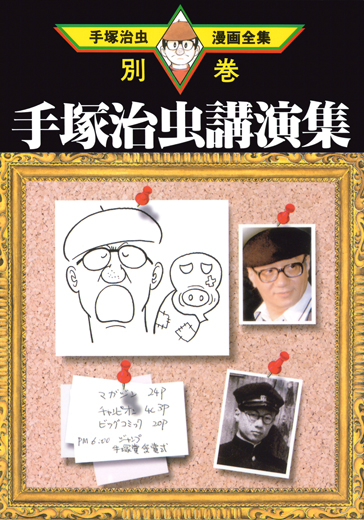 In this collection of lectures, entitled "A Study of Japanese Children's Culture," Tezuka Osamu talks about the tendency of children to rebel when told that something is "good for them." Indeed, the kids' curiosity is piqued when adults try to hide things that they think are "bad" for the children. Instead of fretting over this situation, however, Tezuka Osamu says that adults should simply accept the reality as it is, otherwise "it is impossible to talk about what kind of cultural guidance we should be giving our children." He also covers other topics including a comparison between the prices of Manga books and movies, the rights and wrongs of commercial "character" goods, and the almost religious power that the "boom" phenomenon exudes on the level of the unconscious. Here he clearly indicates the difficulty of the issue of exactly what we should impart on our children. Tezuka Osamu tells us that the question of what is "good" for our children is something that no one can decide, and arrives here at a very convincing conclusion: the only possible answer is for adults to recommend material they themselves find of interest "straight from the heart." In other words, the problem that we have to address is a cultural situation where adults, fascinated with creating material characterized by elements such as prejudiced views, destruction, and abuse, irresponsibly release such material into the world.

In "Message for the people of the future," Tezuka Osamu talks about his own history of having suffered abuse as a child, as well as his war experiences, telling us that the ability to endure difficult situations that he developed during those times has now become his strength. Here, he is of course not in any way implying that war is justifiable: his message is rather that we can find something positive in any human experience. According to Tezuka Osamu, this kind of vitality is already present in each and every living being. What is important is the consistent encouragement of the people in the children's lives, and the presence of adults providing solid guidance. And, far from being pessimistic about the overprotected children of today's affluent world, Tezuka Osamu expresses great hope that the youngsters will work within their particular environments to create their own new forms of culture. He adds that the very concept of maintaining continued optimism for the children is, perhaps, the key to guiding them in the right direction in the future.

This compilation also contains a wealth of other lecture material. "Search for the lost epic adventure" is about the wondrous ability of mankind to remain fascinated with unsolved mysteries and ancient civilizations, and "The progress of science and technology and mankind's way of life" is an analysis of the direction in which the advanced informationalization of society is leading us. In "The role of Manga as a common language of communication in international society," Tezuka Osamu also explores the topic of cultural friction between Japan and the U.S.-as he experienced it when he visited the U.S. to promote "Astro Boy" and "Jungle Emperor Leo"-as well as the amazing capacity of the art of animation to overcome difference in cultural backgrounds and bring people together. In "My first trip all by myself" Tezuka Osamu insists that "good children should be given the privilege of traveling." Other pieces in the collection include "Visuals and Manga," "Manga as a common language" and "Creating a flowering culture and rich human relationships" on the present and future of the genre. "Fantastic future" offers an analysis of what it means to live in the 21st century and provides encouragement for the children to "do their best."